How much trouble can booze cause? award: Wine star: Sean and Michelle up to mischief; Ken, Deirdre, Audrey and Lewis having the dinner party from hell.

Boyfriend Competition award: Gold Star: Jason and David arguing which one of them has more right to be pissed off at Tina.

Suck Up award (In conjunction with an award for massively underestimating Carla): Gold Star: Nick. Carla's back so he's giving the workers a bonus and being nice but he's up against a formidable force.
Silver star: Chris for promising Cheryl: "It won't happen again" 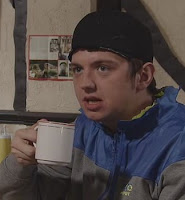 Reality Check award: Gold Star: Lloyd keeps mooning over Cheryl but seeing her with her husband and child like a happy family makes him think twice.
Silver Star: Liz was shown the light and it hurt!


Lines of the Week:

Ken: "Food isn't important, Deirdre, conversation is!" (But when the shoe was on the other foot, Ken was changing the subject!)

Eddie: "My special something is my son." (Aww, sometimes he really does pull a blinder!)
Tina to Graeme: "Were you born yesterday?" Graeme: "1990."
Cheryl: "I probably deserved it." (Oh that makes my blood chill!)
Rita "I have a very high boredom threshold, it comes from years of standing next to him (Norris)"
Rita: "Norris, would you get me a Garibaldi biscuit as well." Norris: "What did your last slave die of?" Rita: "Insolence. Chop, chop."
Sean: "Fat men in lycra, Julie, if i want to see that I'll pop down to the YMCA!"
Lewis to Deirdre: "You are a very naughty girl!" (And doesn't she love it!)
Posted by Tvor at 08:14