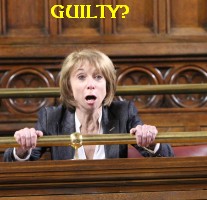 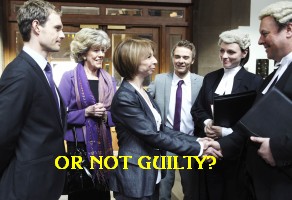 We have a verdict! There was a lot of handwringing among the supporters and indeed, from the accused herself. None of them looked too sure of the outcome. Joe's daugher seemed to be holding her breath and crossing her fingers, hoping for a guilty verdict. You couldn't tell from the jury members' faces as they filed back
in but ...

The arresting police didn't seem too thrilled and neither did Miss McIntyre who let loose a string of vindictive, horrible and, probably grief-stricken emotions directed at her former step-mum. Two viewers in the gallery appear to have had a bet on the outcome which garnered them a few dirty looks from Gail's family members.

I bet if that Ms. Barlow did testify in hope of gaining something and if her testimony was indeed lies, then she'd better hope she can get herself locked in an isolation cell because prisoners don't like tattlers and they like tattlers who lie even less!

If you didn't know the accused, though, the testimony really wasn't condusive to making you convinced she couldn't possibly have killed her husband. If I was to hazard a guess, I wouldn't have put it as premeditated but I suppose she could have lashed out at him with that rolling pin and bashed him overboard accidentally. Still, why would she have brought the rolling pin on board the boat in the first place? It sounds like the jury believed that Joe McIntyre was a total loser who couldn't even manage to fake his own death properly.

Let's hope everyone can put this behind them now and move on.
Posted by Tvor at 18:59