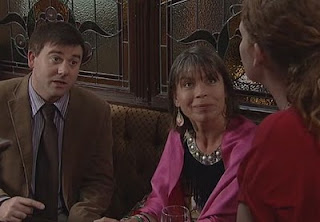 It had to happen. John got caught out while attending an "exam marking" seminar. Really, how difficult can it be that you need a course on how to do something you've done for years? We met Charlotte before, at that party where John took Colin's identity papers. She's bonkers and it shows already! Anyway, she's all excited to be in on the secret and she's acting like John Stape is the secret identity for Superman or something! I hate Stape, though he's a "love to hate" character because he's acted and written so well. This storyline is about to descend into a real farce, Stapegate!
She didn't waste any time coming round to find him at the pub though i do wonder how she knew where he lived? I have a feeling Charlotte has many ways of finding out what she wants to know. The plot thickens... Colin is returning to Britain, or so his Facebook status says. Well it doesn't say that really, but it does say he's lonely. It can only be a matter of time. He's going to want his identity back, you know that. Charlotte then decided to suss out the competition and came to see Fiz. Chesney was a bit surprised to know his ex-teacher was friends with Fiz, though. Mainly because they aren't. Fiz has her pegged though. Lunatic. She's a lot more right than she knows! 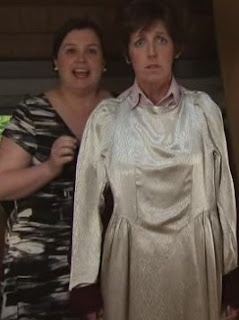 Mary's really acting like Bridezilla and it isn't even her wedding! Feels like she's living her dream through Hayley and shutting out any of Hayley's friends in the process. She's taken possession of the whole planning process and i bet she won't even listen to what Hayley wants! She even gives her that wedding dress she had hanging in the cottage where she and Norris were! That's kind of creepy, really!

If Sean is signing up on "Face space" or something similar, so named, i assume, for copyright reasons, why did Charlotte say something about Colin's "Facebook" status? Fiz is right. If Chesney isn't going to school and he's earning, he *should* be paying rent or contributing to the household costs. It would probably make a big difference to the bank balance if he just bought Schmeichel's food! 30 quid Fiz said and i bet that's a weekly thing, not a monthly. John is actually supportive of Chesney. Ironic then since Chesney really has no liking for John for for all John's faults, and there are many, he probably does understand most kids. I think Fiz and the stress aobut the Fishwick business isn't helping her attitude towards Chesney though I can understand her disappointment. Chesney used to be very smart. There was even a chance of him getting a scholarship to Oakhill. So what happened? Now he's saying school was wasted on him.

I know what Natasha's thinking, if she lends Nick money, he'll have more reason to stay with her. She's just trying too hard and he's taking whatever she's handing over on a plate. If you can't be with the one you love, love the one you're with. She's over the moon for him but he doesn't feel the same way, it's very clear. I wonder sometimes if he ever likes her. 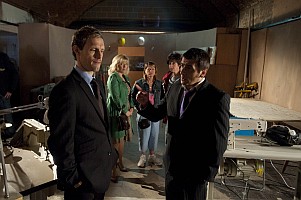 Peter is willing to do anything to shut Nick down. I think we're looking at a testosterone fueled pissing contest if you ask me. Nick wants Leanne though doesn't admit it, Peter must sense it somewhere and is determined to stake out his claim. And then there's always that veil of hypocricy Peter is sporting. With his womanizing past and bigamy, he's not got much room to forbid her from speaking to an ex. He knows he's overreacting but he just can't help himself.

Speed dating? Ciaran had a good idea but i don't really think the Rovers is the trendiest place to have it. Ciaran, meanwhile, is hot for Michelle and making friends with Mama Connor by phone. I guess he hopes that will score him points. Speed dating, ah yes. Anyone ever done that? I'm a bit dubious meself. Michelle keeps saying she doesn't want to go out with Ciaran and when he decides to fling with some other piece of sugar, she gets all jealous and full of attitude. That should tell her something. She fancies Ciaran rotten! (and who wouldn't?) And she's enjoying giving him the runaround too. Don't you think she's a bit of a smug conceited cow? I've never really liked her much. She's a game player, too, I always thought.


Lloyd pointing out that an adoptive child could have issues is probably true. He comes across all sensible until the woman of his dreams comes round and he's hiding behind the cab! Meanwhile the adoption process seems to be a rocky road for Becky, still not really sure she'd actually be a good mother. Steve keeps thinking this adoption thing is a competition with the Windasses. It's not as if there's only one child up for adoption. There are hundreds of kids needing good homes and they could both be accepted and both find a child. Instead, Steve and Becky are being a bit immature about it all. Well Steve is, for sure. Anna and Eddie really seem to have their heads on straight about it.


Lewis is spending a lot of time in the betting shop all of a sudden. No escorting, does he have nothing better to do? Or is he up to something? Well he did admit to Deirdre that he was an escort. Something they have in common. Ken used to do that though not quite in the same league as Lewis.

Considering that Tina seemed to prefer chatting to Graeme in the pub and on the street, it's no surprise she broke up with Jason. I think probably Ciaran was a bit insensitive trying to sell Jason a ticket to the speed dating, mind you. But as Kirk says, that's just leaving more for them! Wouldn't it be a laugh if Kirk did find a girlfriend out of the speed dating? All he did get was his face slapped. I guess he and Izzy have decided to just be friends. Cheryl used the opportunity to send more mixed signals to Lloyd. I am not quite sure what Graeme was wibbling about in the butcher shop, and if he's hoping that will woo someone, he's probably got another think coming. I guess he didn't have to worry about speed dating. He ended up staying the night with Tina! We could see that coming but i don't think he did. And no wonder. It was moan, moan, moan, i want you, kiss me! It certainly made Graeme's day, I'll tell you that and it made Ashley's day too! 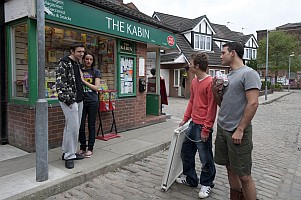 At least Graeme was honest, he told David straight away even if he did chain him to a radiator for his own safety first. That was too funny, though! David hauling the radiator out into the street after he'd yanked it from the wall. He's lost his best friend, though and you know how sneaky and vengeful he can be, Graeme better watch his back. He's already started, saying Tina sleeps with any bloke but his heart is broken and he's never been able to let her go. He cut the peaks off Graeme's caps and the hoods off his hoodies! LOL! Jason wasn't too happy either and he was a bit more proactive. Changed the locks but Tina's right, I think she could have a case for charging him. She owns the flat, too! And was i hearing right? Was Nick really giving David advice like he actually cared? I did think it refreshing that Tina broke up with Jason first. Usually it's cheating partners and stealing kisses in the ginnel first.


And check out the State of the Street for a review of Corrie that aired over June 2010 (we're about to hit July on Canadian screens)
Posted by Tvor at 11:31