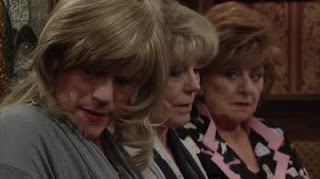 Baring your problems in public: Audrey, hugely embarassed in the pub by Marc, sits with Gail on a public bench instead of inside Gail's house privately and the Marc and Audrey took a cab home instead of Marc's car which he'd obviously arrived in.

Hypocrite award: Gold Star: I thought Roy refused to let Sylvia work in the cafe after the Norris thing but she was there again days later. Where's Anna? 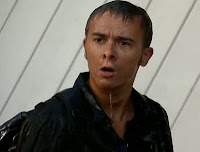 Circus award: Gail and Kylie's very public row was the best entertainment the neighbours have seen in months.


Stylista award: The wet look really isn't for you, David

Holier than Thou award: Gold Star: Gail and Audrey have reason to dislike and distrust Kylie but they really have gone over the top with disapproval.

You're new here, right? Tommy recognized the "Clayborne Estate" (i.e. rough neighbourhood. He's only lived in Weatherfield 5 minutes, how would he know? Gary knew though and knew who Leon was, and shuddered. 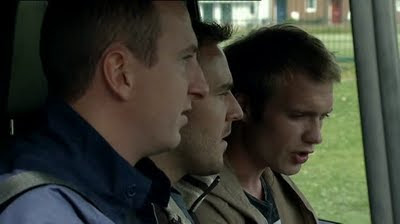 Keystone Cops award (paired with Gormless Award): Tin star: Tyrone, Kirk and Tommy against the drug dealer. Going after a dealer with a very identifiable vehicle? (Well, I thought it was funny!)

Overkill award: Two people do not need a 5 bedroom house.

Selective hearing award: Whispering Star: Roy didn't hear Norris locked in the toilet below his own flat but could hear Mr. Druggie hollering from inside a meat locker INSIDE another building!

Overreaction award: Gold Star: Did Audrey really think Kylie would take ALL her hair clients away from her? 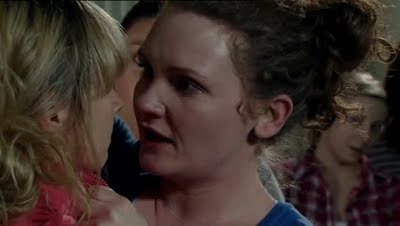 Inner Cilla award: Go Fiz! Now she needs to have a go at that dark haired bully.

Blame shifter award: Everyone's blaming everyone else for the accident.


Lines of the Week:
Sean to Eileen "You are the glass half empty, chipped, been through the dishwasher of life too many times type"
Audrey "People's fears come from ignorance"
Sally about Marc "He always dresses so smartly" (Not always, that wig doesn't get any better with time does it?)
Kylie "Tranny on the rampage part 2" (Cow!)
Anna to Ches and Katy "Being grown up doesn't mean you have to shut everyone else out" (which you learn as you grow up, usually the hard way)
Mary "I can't imagine Norris dressed as a woman. He's far too rugged and masculine" (I'm speechless, just like the rest of them.)
Audrey to Kylie "Are you deaf as well as daft?"
Sylvia to Norris "Did you want anything or did you just come in to be spiteful"
Norris "True Love? Her and David Platt? More like True Crime"
Becky "If you want someone that understands gobspeak, go hire a Dalek"
Mary about Norris' disappearance "That's not like Norris" (twice in two weeks, maybe it is!)
Tina "You were stupid boys with a stupid plan"
Kirk "when you've got tape tangled in your hair and Mr. Foster down your neck, you wish you'd made friends with that baby!" (meaning the tape gun).
Carla "In-laws that actually like me. That's a first" (And it didn't last very long)
Posted by Tvor at 11:56