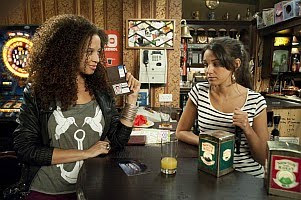 Carla deals with the aftermath of the rape. Peter and Maria both support her but Peter has to deal with Leanne's insecurities and questions, questions that Frank incites when he plays on her fears. Frank pulls Peter's chain and it ends up in a bust up. Frank denies everything but Carla has him arrested. Carla spirals out of control and hits rock bottom. Will she survived it?

Tyrone is caught in the middle between Kirsty and Tina. Anna and Owen move closer. Dev annoys Sunita with his focus on Aadi's golf ability. Tyrone suffers another blow over Kevin and baby Jack. Jeff is back, will Sally forgive and forget?

Bill Webster is back, too, but the stress caused by Kevin and Tyrone's feud and Pam's hatred for Kevin has serious health implications. Tracy supports Steve and makes inroads. Cheryl starts feeling more than just sorry for Chris. Is the old magic back?

For more detail and photos, see the Moosejaw Mercury at Corrie.net
Posted by Tvor at 07:50