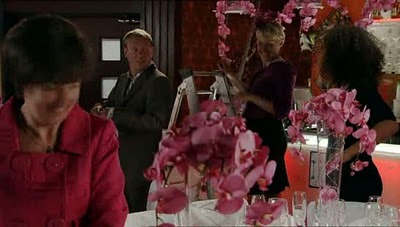 Explosion of Pink award: Man that was a lot of pink in the Bistro for the wedding decos but I did like Hayley's jacket!

Delusional award: Frank has convinced himself that he's done nothing wrong and later, that he will get away with it anyway. He ignored his bail conditions, admitted the rape to Carla and he used all his powers of persuasion to try to make her see that she would lose in court.

Put in your place award: Gold Star: Kirsty finally shut Tina up (for a minute) by flashing her badge.
Silver Star: Rita tore a strip off Tina, told her to be more responsible and mature - and she's right.

Movers and Shakers award: Obnoxious star: Dev reckons he can network on the golf course. He only owns one poxy shop not a world wide corporation but it's all about image for him. 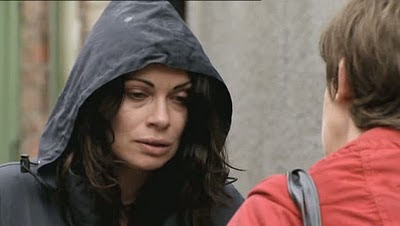 
Mixed signals award: Gold Star: Peter knows how Carla feels about him and how Leanne feels about the whole thing, why does he keep sniffing around her? No wonder she can't get over him, and Leanne knows it.

Smooth Operator award: Slick star: Frank really knows how to push buttons, even with no evidence, he knows just what to say to get first Peter and then Leanne going.

Mug award: Gold Star: Sally's had a reality check from Pam.
Silver Star: Steve for that remark of Tracy's "If your dad can't see it, he doesn't deserve a mug!"

Taking for granted award: Gold Star: One shag and Kevin is back to leaving laundry for Sal to do and thinking all is forgiven. Wrong. Flowers and wine are a bit late in the game.

Bleach my brain award: Sophie wasn't too happy about the image of her parents having sex.

Suck up award: Gold Star: Tracy's really working hard to get Steve on her side. 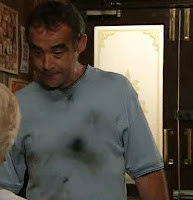 Laundry Fail award: Dirty Star: Kevin, you could wash your clothes before going out in public.


Lines of the Week:
Frank "I just ask you to reserve your judgement" Sean "Justice will be done!" (as per soap law)
Dev "Self Important???? Me?????" (yes, actually)
Sally "He loved her one minute" Sean "And then raped her the next"
Owen "I see your water's broken!"
Frank "None of this would have happened if you had trusted me" (as much as admitting it then)
Sunita "If you're determined to squander our money, you squander it equally"
Frank "You want my opinion? Your husband. My ex-fiance. They're at it like knives"
Sally "As soon as his shoulder's healed, he's getting the elbow" (He's back and work, what more do you need?)
Amber to Dev "You couldn't motivate Johnny Vegas into a pie shop"
Owen "I build walls. And not just for a living"
Kevin about Bill's full English breakfast "What she don't know, she can't grieve over" (and she nearly had to)
Kirk "You can be very deep sometimes, Hayley, it makes my head ache"
Carla's mantra "I'm alive, I'm breathin', I'm makin' him pay"
Sophie to Rosie "Stick your head in the oven not the fridge, it's quicker"
Rosie "There's different kinds of oranges! It's mind boggling!"
Sally "I'm sorry Kevin but you're not THAT good!!"
Posted by Tvor at 09:40