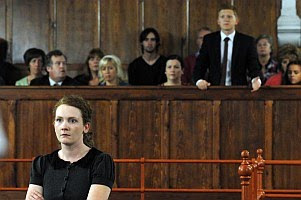 Frank sets up a rival factory and nicks the laid off Underworld staff. Sally has decided that she's on Team Frank. Meanwhile, Underworld is struggling to stay afloat.

Sophie goes out clubbing with Amber but Amber's games give Sophie doubts about her feelings for Sian. But she's got a radical plan to prove she still loves Sian. Chris continues to pretend he's dying and Cheryl falls for it and his charms all over again.

Fiz's trial is coming and Fiz is scared. Will she change her plea to guilty? And her past is lurking around a corner. John's back in town! The trial begins and it doesn't look good. Meanwhile, John has a plan to use Rosie to reveal his confession rather than turn himself in. When that goes horribly wrong, John goes on the run with Kevin speeding after him. As the verdict comes down in court, John's life hangs in the balance and Fiz is by his side. Will he vindicate her before it's too late?

Eileen discovers Paul's secret but there's more to it than meets the eye. Owen and Anna are still sneaking around. Sylvia's a winner, much to Norris and Mary's chagrin.

Rosie decides to split up Jeff and Sally, hoping to get Kevin back in the picture but her set up backfires. She also puts pressure on Jason to sell his flat.

For more detail and photos, see the Moosejaw Mercury at Corrie.net
Posted by Tvor at 11:37