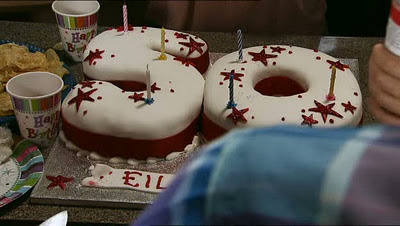 Happy "SO" Birthday Eileen! Nigel might have been a bit of a washout but she met a dishy fireman (And I've thought he was dishy ever since the tram crash)! She might have been embarassed by it all but it *was* funny!

Boomerang award: Gold star: Peter... yet again visits Carla. Does he tell Leanne? Does he heck.

One Upmanship award: Gold Star: Yes Chris, you are competing with Lloyd. Don't think we can't see it.

Bolt out of the blue award: Stunned Stars: Tracy is having twins! Steve kissed Tracy!

Biology fail award: Steve figures his swimmers are gold medal winners. No. It's one egg divided or two eggs that fertilized.

Fashionably ironic: Tracy's tshirt says "I'll lock you up" At least she knows what she's talking about. 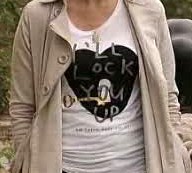 Master Manipulator award: Gold Star: Chris again for pretending there's not much hope re his health. Tears and everything.
Silver Star: Tracy has obviously not changed. and.. Steve You Moron!

Job? What job? Gold star: Stella comes back from her second holiday, puts Tracy in her place and then leaves to visit Carla.

This Means War award: Gold Star: Carla is determined to fight for her factory. Anne is just as determined to stick up for Frank. (she looks a bit like Frank, too, don't you think?)

And They're Off award: Gold Star: The contest competitors are at it again, with a new entrant (Sylvia) covertly playing her cards close to her chest.

Flamin' Cheek award: Frank took 40% of the equipment and supplies out of the factory! I bet he didn't take 40% of the debts though.

Continuity Fairy off duty: Sean said Carla hadn't even shown her face but Hayley had already been talking to her and Carla was right behind them in the office making calls.

Pants on Fire award: Paul is pretending it's his brother that didn't want Eileen to come in the house. That sounds like a load of horse hockey to me!


Lines of the Week:
Kevin "I didn't shout me mouth off" (you did, you know)
Bill to Kevin "Rule 1. You do not take them for granted. Rule 2. You DO not take them for granted. It's a hanging offence!"
Maria "Is there anything more boring than golf?" Tracy "Dev talking about golf"
Deirdre "Granny Blanche always said if she saw another stork coming, she'd shoot it and eat it!"
Sylvia "At all times maintain dignity"
Sophie to Sian "I love you and I'd never, ever, ever want to screw that up" (Phrase of Doom, there folks)
Deirdre "We could always sit in and eat nuts"
Kylie "A girl's got to look good when she's going on a hot date" Gail "Oh, been hanging around outside the One O'Clock Club, Eileen?"
Sylvia "Did Emily Pankhurst chain herself to the gates of Parliament so you could stand there having to work while pregnant?"
Deirdre to Steve "Tracy might not care what shows up in her bed but I'm the one that has to do the washing" (She meant toast crumbs, but that was a bit close to the knuckle wasn't it?)
Sylvia on her new knee "I reckon they got it from a Blackpool donkey the way it plays me up some days"
Eileen "Sally Webster does not suit smiling"
Frank "I *am* the victim" (see Flamin' Cheek award above)
Stella "I know it's none of my business but..." (you're right, it isn't. Go away)
Posted by Tvor at 12:30