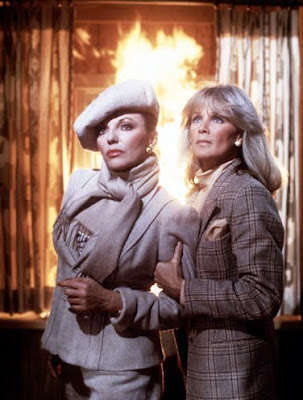 (This post was originally posted by Fat Brenda on the Coronation Street Blog in October 2011, reposted with permission.)

So Eileen and Becky are after me job are they? ‘Fat Brenda only does part-time!’ That cheeky witch! Lloyd put ‘em in their place though – bless him. It took me years to get rid of Eileen and she can whistle if she thinks she’s coming back here and eating me Viscounts and Blue Ribbands!

Oh loveys, can you believe Sally is working for Frank?! What a horrible thing to do. She should know all about being stabbed in’t back after Kevin and Molly and she’s working for that monster! Carla was very supportive of Sally when she had cancer but folk round here have very short memories – I mean look at Steve McDonald, he’s forgotten how much of a boyfriend murdering mare Tracy Barlow is!

And if you thought Frank was bad then his flamin' mother is summat else! Where the flaming hell did they get her from? 'I'm Frank's proxy.' Is 'proxy' the new word for annoying mum?

Frank's cleared out half the machines and stock! What an evil fella! It’s been like a trouble magnet ever since that factory went to the Connor clan!

Thank Cliff for that, Carla! You can flamin’ keep it, lovey!

In fact, while I think on, I remember summat about that Paul Connor driving the car that killed Michelle's fella, Dean, and they switched the drivers after the crash. History repeating itself loveys?

The trend of other lasses my age getting fit fellas is going strong with Eileen bagging herself a hunky fireman called Paul! I can only think that excessive exposure to smoke from his job has permanently damaged his eyes causing him to see everything through a smoky fog. Every time he looks at Eileen it’s like she’s in soft focus like that Crystal Carrington from Dynasty! As for Sally, she bedded Kevin and then Jeff the following night! I can only hope she had a bath or at the very least a Dettol wipe!

Sophie is devastated that her lying, cheating, illegitimate baby making weasel of a grumpy horrible greasy overall wearing flamin' dad isn't welcome in the family home! Kev thought he'd finally cracked it after buying Sally that bottle of £2.99 paint stripper flavoured wine from Dev's, but the Sally was not for turning!

Poor Sophie, 'Can I lend some money cuz I wanna go on holiday with Sian?' I'll tell you what lovey, why don't you steal a load of money of yer dad again... and then bang on about how folk aren't nice to him! Flamin' hypocrite!

I don't know what happened to Amber at uni-flamin'-versity but she seems to be acting like someone else. I used to like her when she were dating that gormless Daryl who made them kebabs and gave me extra meat for a quid. It's always the same, they go away and they come back totally different - I mean, look at Nick, he's left twice and come back totally different each time!

What troubles me at the moment is why anyone would actually like Tina. Rita wanders about telling folk ‘she reminds me of me.’ Really? Is that cos you were a club singer that oozed class and Tina runs about from fella to fella shrieking at anyone who says owt she dun’t like? She’s a good-looking lass loveys, don’t get me wrong, but she needs to do summat about that flamin’ attitude! If I were Tyrone I’d send her packing. She nearly ruined that curry Tyrone didn’t make for his new lass, and after all that effort of ringing through an order and then collecting it from Rosamund Street!

Ty told me he’s scared of getting hurt again so I told him, ‘Don’t be flamin’ soft, Ty! What’s up with you? Flamin’ hell, no wonder Molly had a wandering flamin’ eye!’ Hopefully I helped him come to terms with his insecurities!

I personally think Tina should be with Tommy, they both get on me wick and they both use too much fake tan. They could talk about how belting looking they are while spray tanning each other. A match made in heaven (or hell?)

I'm going now loveys, I've got a date with Doctor Carter - he calls it an appointment, I call it a date!