Keeping up appearances on Coronation Street (This post was originally posted by Llifon on the Coronation Street Blog in April 2013.)

No, it's not about the hilarious antics of Hyacinth Bucket and hubby Richard - although Patricia Routledge did appear on the Street for a few episodes in 1961!

Having looked at the appearances of characters over the last few months, what came to my mind was how important it is for every character to keep up their appearances and not become absent for long periods of time - unless of course illness or bereavement on the actor's part keeps them from appearing.

I think in a show like Coronation Street every character should have equal screen time. Or maybe not equal, but no character should be over-exposed. It is natural that the Rovers' boss and the bar staff appear more often than any other, but they shouldn't necessarily appear all the time.

Back in the 1970s and 1980s, Annie Walker, Betty Turpin and Bet Lynch would appear in 70-80 episodes a year, so you had about 20-25 episodes where they didn't appear. In many of the episodes, they weren't the stars of the episode, they were simply pulling a pint or having a few lines of dialogue. In recent years, the likes of Becky, Tina and Stella have been over-exposed in their Rovers roles and so we tire of them. If they're not having a crisis, they're always seen behind the bar. They seem never to have a day off. Or maybe I'm looking through rose-tinted specs? You viewers of Corrie back in the 70s and 80s, did you feel that certain characters were over exposed? Maybe you grew tired of Elsie, Hilda, Bet or Len? Both Len and Elsie topped the appearance charts for 20 years or more. But was there a difference that they didn't dominate episodes like current top-appearing characters?

Maybe the fact that there are more episodes now so characters have to appear more on screen. Prior to 1989, if you grew tired of a character on a Wednesday, you had until the following Monday to have a break from them. 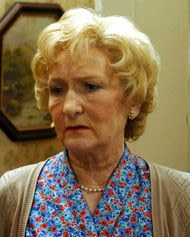 I just feel that certain characters are being cruelly underused - like Kirk and Deirdre for instance. Whereas Deirdre was the soap's biggest asset at one time, she's now a background character. And yet Gail is still a vital part of the show and Helen Worth is older than Anne Kirkbride.

What is your view? Do you think every character should have an equal footing? Or do you have a thrill of seeing Emily Bishop appear on a recurring basis? I'd love to hear your thoughts!

Stan and Hilda were total classics and so were Jack and Vera. Never tired of those characters. Can't really understand why Gail has more story lines that Dierdre. It depends on what is going on at the time but sometimes feel Owen and the gang get lots of airtime over others. Sean used to have good storylines and so did Jenna but not much anymore.

YES, Sally Webster carries on the grand tradition of Vera Duckworth, HIlda Ogden, and Annie Walker of women who all thought they were a cut above those around them.