Ryan Thomas: 'Leaving Corrie was the toughest decision ever' 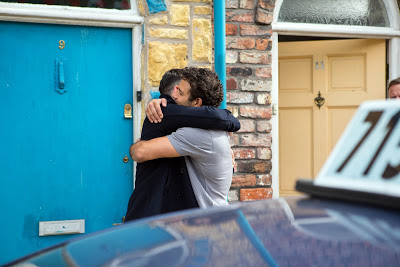 (This post was originally posted by Flaming Nora on the Coronation Street Blog June 2016, reposted to this blog with permission.)

Ryan Thomas, who plays Jason Grimshaw, has now left Coronation Street. He's filmed his final scenes and by the look of these pictures, he's been spending his days in the gym.

His leaving interviews are dotted around the tabloids and the magazines today and we're choosing to link to the rather wonderful Inside Soap magazine to bring you some highlights of their interview with Ryan.

Ryan says that leaving the show has been the toughest decision he's had to make because it's been his life since he was 16 years old. It's all he knows, he says, and he wants to experience more.

"Bruno and Tina have previously left the show to do other things, and it's as though I was left behind and I missed out on all of that" Ryan says, referring to his cast-mates, who play Todd and Sarah in Corrie.

He says that actor Terence Maynard, who played Tony Stewart, was a big influence on him while he was in the show as Jason's dad. Ryan was so impressed wih the actor's work that it inspired him to leave the security of a long-term soap role and find out what the rest of the acting world has to offer.

Thankfully they haven't killed off Jason,
so perhaps we'll see him back some day,
at least as a guest appearance when Phaelen
finally falls from that great height he's
climbing over people to achieve.