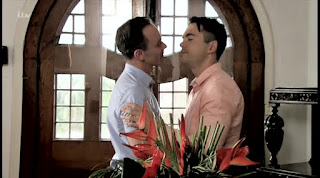 Billy, who wasn't really backwards in coming forwards when he got together with Sean, seems to be all flustered around Todd but very flattered with his attentions, until, of course, Todd had a bit of fun when the Bishop was visiting. (BILLY! TATTOOS!!!) Todd had a long philosophical discussion with the Bishop about the church vs. homosexuality in today's society though Billy and the Bishop turned it around on Todd to try to get him to join the church! Later, Billy doesn't want to jump right in to a physical relationship with Todd, just yet. He's more cautious, and it's not just getting over Sean. 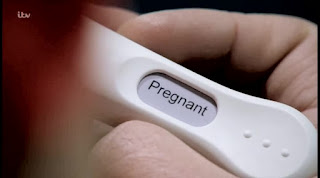 I think Nick is definitely leaning towards Leanne again and she kind of is and kind of isn't letting him in closer. "Same old same old" comes to mind. But she's still taking painkillers for her bad back and they're making her ill. She went to the doctor but the doctor asked her if she could be pregnant. She said no, but then realized she very well could be, took the test and the test says yes! Now, the night of that mystery man was only a couple of weeks ago so if she's late at all, it's probably not by much which would be why she wasn't already supicious. She nearly bit Nick's head off after she found out. We still don't know who the father is, and the suspects line up. Nick, Robert, or someone else? There were rumours about Zeedan but he's very strict with his religion and I don't think he'd go for Leanne, especially because we saw evidence of wine and he wouldn't drink even if he would have sex with a non-Muslim.

Leanne was shocked but we've already been told in the past that she wasn't likely to be able to get pregnant again. She was due to have a drink with Nick in the pub. She's delayed, obviously, leaving Nick and Robert, the two alpha males on the Street, to knock antlers on the hilltop. Tiresome. Leanne kept looking at Robert while begging off her drinks date with Nick and their conversation was a bit vague. Is that a clue? Meanwhile, Simon is worried she's got something dire like cancer but she had to reassure him on that score.

She really needs to talk to someone but Eva is away visiting her gran in France. Leanne is all at sixes and sevens and seems to be backing off from Nick again, not quite admitting there's someone else. He's scared she's going to lead him on and then dump him and she has a baby daddy she's got to tell. It doesn't seem like it's Nick or I think she'd have said. Leanne can't be more than 2 weeks pregnant but she's already got morning sickness. I know everyone's different but that's a bit soon, innit? I looked it up, it was less that 2 weeks ago. At least she didn't go for the soap cliche and faint.

Anyway, Steph keeps coming round to talk Leanne into coming back to work and she ended up finding the pregnancy test but she pretended it was Eva's and was negative. 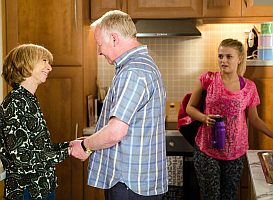 David and Kylie have redecorated the annex and moved in there themselves, looking to put the past in the past and make a future for themselves. Kylie decides to help Gail find her future, too, when she realizes that Gail still loves Michael even though she thinks that ship has sailed. A little engineering and bob's your uncle, Gail and Michael are back together! Awww! I'm chuffed! It's nice to see Gail happy again. I always thought the two of them suited each other well.

Kylie can see Bethany is not herself and has something on her mind. Even though school is out, the bullies are still harassing Bethany. She made Bethany tell her what was going on. Poor kid really felt alone with her mother ill and she couldn't tell anyone and she can't seem to stand up for herself. She doesn't know how she's going to handle it, but she's determined to do it on her own.

Kylie still isn't so comfortable in the annex, just the same. There are still ghosts. And Max seems to be feeling the loss of his dad, too, even if he isn't overly upset that he died. Lovely little scene between he and Bethany after his "accident". Bethany might have washed his sheet but she forgot to wash off the mattress. Kylie seems to be out of sorts, too though she seems pleased Michael and Gail are back together. She blames herself for it all because she brought Callum back into their lives in the first place.

Apparently, school is closed due to a burst pipe and Aadi and Asha have to stay at David's. Whatever happened to Mary? Erica works at the shop, Mary only helps out occasionally at the Kabin so why wasn't she available? Yep, more contrived horse hockey to give Kylie even more stress in order to push her to make arrangments to start over in Barbados. Those rotten kids made Max go in the bedroom where the body was and the handle on the door fell off. I guess Michael's not very good at fixing stuff.

There's an awful lot of talk about David and Kylie and the future. And David telling Nick he is a lucky guy having bagged Kylie. There's also a lot of bonding with Kylie and Bethany, and nice little scenes with Kylie and Gail. She's telling Max she'll always look after him. All that kind of talk makes me nervous. Very nervous. It's just all too perfect and phrase of doom-y. The next thing you know, Kylie and David have made a snap decision to move to Barbados where Becky lives for a fresh start. 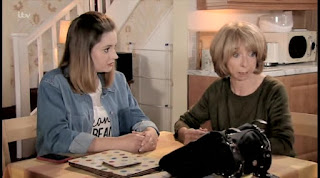 Kylie has given Gemma some good advice. Let's hope Gemma can cut her old life off. David wants to wait a bit, he wants to officially adopt Max first. She reckons they can still do it from Barbados which, no doubt, they can. But first they have to tell Gail and she wasn't happy about it, not at all. She's using all her ammunition. My grandchildren, Sarah, stability for the children. Kylie brought out her own ammunition. Max shouldn't grow up in the house where his dad's body was found. He's having nightmares, wetting the bed. It's hard to argue with that. She really does want the best for her children and as hard as it is, Gail does know the truth of that.

Callum's and Gemma's old co-horts are lurking around the kebab shop, giving Gemma grief and making her give them free food. But when Sinead, who already feels a bit threatened by Gemma and Chesney's friendship, calls her on being a thief, she turns the tables and proves she's changing. She's been paying for the food out of her own pocket so Sinead had to apologize. Grudgingly.

Chesney trusted Gemma all along and I think that trust has gone a long way to giving her the confidence to stick to the straight and narrow. It looks like she's really trying to turn her life around but Callum's mates aren't going to let it go that easily. Dev caught the fake bank notes and Chesney took the blame for it even though Dev assumed Gemma was responsible. At least Dev had the grace to apologize but Chesney gave Gemma a serious warning. 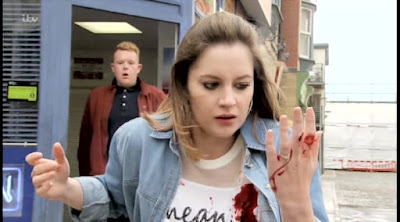 After Kylie gave Gemma some advice, she was determined to change her life, starting with Clayton who tried to get her to change counterfeit money again. Wasn't it heartwarming when she was proud of herself, something that doesn't happen too often? Later, Craig was full of praise about the kebab Gemma created for him. A work of art! But Clayton came back and attacked Gemma and when Kylie came to her rescue, Gemma was unconscious on the ground and Kylie was left with a stab wound!!!!! There have been too many phrases of doom hurled around this week. This isn't going to end well.

Audrey is still kind of hovering around Ken, in friendship at least, and Freddie's still around and on her arm as well. He's a nice fella but I would imagine he's in no way ready to start a proper relationship with someone so soon after his Sadie died, unlike the Barlow-meister when he rebounded into the pirhana that was Nessa. Even Freddie is trying to get Audrey to ask Ken out! He's a good mate, is Freddie. He got straight to the point with Ken, suggesting he take Audrey to the theatre but of course there's continual crossed signals when he sees Audrey being affectionate with Freddie. He gave her the theatre tickets instead, with a lame excuse about a reunion of teachers at the school. Instead, Ken keeps walking around with a pained look on his face (which, to be fair, isn't all that unusual anyway) This is really getting tedious.

And actualleh, Freddie and Audrey make a better suited pair. Ken is too high falutin' for most people and he'd bore Audrey to tears whereas Freddie would make her laugh. I think with Ken, he's snoozed so he's about to lose.

Robert's turned into a bit of a tool, hasn't he? He's apparently shouty and stern with his staff and he's certainly defensive when Leanne offered Steph some advice. Is he missing Tracy or is that just his real personality and his nice guy front was just that? He does still have a nice side, which we saw when he was good to Amy last week, but he seems a lot harder these days. 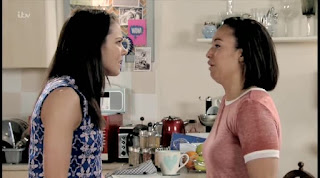 Sophie is still glaring daggers at Caz and when a woman came looking for her, she pointed her to the Bistro where she knew Caz was. Mind you, she didn't think anything of it. And it turns out, the woman was checking up on Private Hammond and we find out that Caz is being court martialled!!! Caz lied to Kate about the meeting and when she found out Sophie redirected the woman, she blamed Sophie for her troubles with a warning. Caz's solution? Try to talk Kate into eloping. She'll think about it.

It didn't take very long for Caz's true colours to come out. Scally mates were causing trouble and chatting up Kate so Caz took one of them and rousted him right out the door, then tried to play up her ankle but both Sophie and Kate realized she as faking. Caz pretended she's only a little bit better and she stayed so she didn't have to leave Kate. She promised not to lie to Kate again but she already is, re the court martial. Kate's willing to believe it but it looks like she has doubts just the same.

The Army MP lady caught up with Caz again and the court martial cat is out of the bag. The truth was, Caz got in a fight, it wasn't an accident and the other girl was badly hurt from the sound of it, or the implication of it. Kate is outraged and Caz is begging but Kate isn't having it. Too many lies, Caz. It's over.