Lee most definitely bit off more than he could chew with Sarah going right off the rails. He joked that Callum was alive and since Sarah already half believed it, she was utterly convinced. She tried to run and he grabbed her from behind, she fought and ended up with him over her on the floor, all just like what happened with Callum. She probably relived the whole thing, poor kid! Right then, that's when it happened, that's when she broke into a million little pieces inside and even though David got her out, he can see she's seriously ill and it's really shaken him and Kylie up. Yet, he's still reluctant to take her to a doctor because he's afraid she'll tell the truth of what really happened.

David is still trying to avoid the inevitable. Kylie is really worried and thinks they need to tell Gail that Sarah's ill so she did. Naturally, Gail just thinks it's a bit of stress. Gail has a long history of not getting her children psychiatric help when they should have had it. (Richard Hillman, anyone?) Her plan is to talk to Nick because brain damage is the same as every other kind of mental illness. Nobody wants to believe Kylie and David is trying desperately to downplay it. None of them know that Sarah's next move is to make endless lists and try to get the locks on the house changed and if possible, the windows boarded up! She asked Phelan if he could do it and handed him over 200 quid. I hope he's not going to rip her off. He's not got many compassionate bones in his body but surely he's got something of a human being in there. (Nope, later on he agreed with Jason that they wouldn't charge her and then paid for the beer with the money she gave him) He did get the locks changed. But stopped short of boarding up and panic buttons. Todd didn't get through to Sarah and he called in the cavalry. 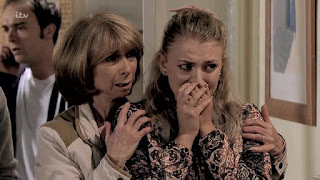 The only way anyone could get in was Bethany pretending she was scared of Callum, too. Motherly instinct overriding the fear got her to open the door but they all piled in. In the end, it was David that called the ambulance. Now she's in the hospital, heavily sedated and Kylie feels enormously guilty for bringing Callum into their lives in the first place. Jason and Todd are really affected, too, seeing her in that state. By heavens this was a powerfully well acted storyline this week. 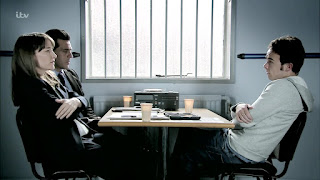 There are more twists and turns in the murder investigation this week, too. David is questioned again and has suggested to Kylie that in the worst case scenario, he'd confess to keep her out of prison and home with the children but he doesn't end up doing that. After all these weeks, the police have finally come across some cctv video placing him at the Dog and Gun which he could explain away and which didn't prove anything, and they've found the texts David sent from Callum's phone, after he was dead. David was cool and collected though it looked like he was going to spill the beans at the end.

Kylie decides to make some sort of statement and Jason's conscience, and shock at seeing the state of Sarah, I think, has him handing in Tony's tools. I guess he's finally accepts that Tony killed Callum (though of course, he didn't). The police are happy to have a potential murder weapon, though if it's been washed and wiped clean, it wouldn't condemn or exonerate Tony or anyone else. David and Kylie should be breathing a sigh of relief except there's Sarah to worry about.

I know Alex wants to be considered an adult but if he's going to steal cars behind Roy's back, even if it was to take Gemma to the cemetery, he's going to have to be treated like a kid and Cathy is just going to have to suck it up.It gets worse. Roy got a notification of a speeding ticket in the post. He knows he wasn't driving the car. He suspects Alex who doesn't exactly lie but doesn't admit the truth either.

He verified that it was indeed his car and bluffed Alex by deciding to call the police. Alex finally admitted it was him.  Don't get mad at Roy for arguing the letter of the law, give Alex a stern talking to instead. Mind you, with a mother like Nessa, it's no wonder the kid has grown up to have no sense of responsibility. Alex did break any number of laws and Roy was angry. Cathy thinks scolding him and forbidding him to drive is enough. Roy, as black and white as the law, wants to report Alex. Cathy offered to take the hit but Roy doesn't have a dishonest bone in his body.

Gemma and Alex have made friends. She reckons he could get off, play up his disability, his honest face and is a good liar. She wasn't being mean, she was being opportunistic! Alex decided to do the right thing and go to the police himself. Cathy is furious that Roy was so rigid. All for 2 miles an hour over the speed limit. But that's Roy. Alex got let off with a caution. Gemma fought in Alex's corner and Roy backed down, even offering Alex the use of the Woody if he got a learner's permit. Cathy is giving Roy the cold shoulder, she's seen a new side of him that she hadn't seen before. She finally forgave him but it's been an awfully big deal over a 2 mile an hour over the limit issue. Roy should have known that it would only end in a caution so he shouldn't have come across so harsh.

Steve and Michelle are still doing a dance around each other and it's very boring. Probably because I don't care about them as a couple. Never have. It was clever of Tim to pretend to be having a flashback about Sally kissing Kevin, encouraging Steve to comfort him and then the penny dropped, Steve realized it's the same situation. He better work fast, though, Michelle might sail away on a cruise ship for a few months. Tim signing Steve up for dating websites behind his back certainly backfired. She's determined to go on the cruise job. Is it wrong of me to say PLEASE go?? 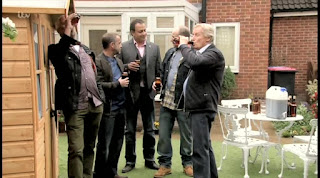 Loved that Yasmeen is still trying to cause mischief for Sally. She encouraged Tim to have a beer party to christen the "summer house" knowing Sally had councillors coming but it backfired. The council guy and his wife both loved the beer and got stuck in, much to Sally's horror and Yasmeen's dismay. I was very surprised to see Ken Barlow standing around in the back garden with the others and even more so to see him chugging beer from the bottle. Ken!!! Must have been one of William Roache's guaranteed appearances or something. It felt very out of place.

Beth didn't want to go to the reunion and Kirk thought it would be good fun. It wasn't. She had a rough encounter with an old rival who is just as bitchy as you would expect her to be with a weak yellow bellied husband cowering behind her. Beth finally defended herself, her life and her less than genius husband but it hurt Kirk's feelings and he's really thrown for a loop. He's angry at her and she's not having much luck talking him around. Things are chilly between them at the factory.

Meanwhile, Norris is still on his own, a bit lonely with nobody to chat with over his morning egg. This will become relevant. Norris, not the egg. Kirk's situation has come to Norris' attention when Alya let slip that Beth really is sorry. Alya gave him the barest of outlines, not enough gossip for Norris but hearing the kerfuffle next door with Sarah's breakdown made up for it. And he's in a prime spot for nosing, being just a few yards away.

That aside, Beth's attempt at reconciliation blew up in her face, thanks to Norris and now Norris has himself a new roommate because Kirk has nowhere to go. Norris doesn't know what to do with Kirk so they decided to play checkers (drafts, Norris calls it). You wouldn't think Norris would have the patience for Kirk but oddly enough, they seem to mesh very well over the board games and the boiled eggs. So much so that Norris is quite happy to keep Kirk on as a roomie when Kirk isn't inclined to return home just yet. We all know there's more to Kirk even if he's not the sharpest tool in the box, maybe Norris is finding out about Kirk's genuine good heart now.


Billy and Lee seem to have come to a parting of the ways, too. Billy has had enough of Lee pressing all his guilt buttons and this latest scheme, holding Sarah against her will broke the camel's back. Their relationship, what there was left of it, is irrevocably broken. You couldn't get two more opposite siblings and they don't look remotely alike so it was always hard to buy into it. It was still a good storyline, just the same. Billy has Sean to pick up the pieces but Todd keeps watching them. He was angry when Billy said he was falling for him but I think the feelings are returned now. I have a feeling Sean is going to be heartbroken again.

Just the same, Billy must have gone back to check on Lee and he's disappeared. Todd is supportive as he has been all along. When Billy found out that Sarah was taken away, he tore a big, wide strip off Norris for being nasty about Harry being better off without her. It really looks like Billy has having a crisis.

Robert is trying to get Leanne to come back to work. She isn't having it, not even for a 30% raise! She did decide to go back when she got the letter about paying 500 pounds for Simon's football. Simon wasn't even mildly irritated when she said she couldn't afford it. Financial problems took her back to Robert and his job offer, 25% pay rise included. But then Leanne makes a few disparaging remarks about Nick to Robert which Nick hears and he feels betrayed all over again.

You do have to wonder about Robert, though. He is starting to show an aggressive side of him that we didn't see earlier on and it makes you think he was a better match for Tracy than we all thought. He does have a "do the right thing" side to him, though, which she definitely hasn't had much up to now unless she was forced into it. 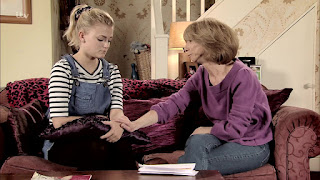 Luke really is suspicious of Caz even if Maria's completely naive about her. Even Kate seems to have a few doubts. Bethany's antics skipping her exams have come back to bite her in the backside. But to be fair, she has been under a lot of pressure. I'm sure there's a way she could take the exams again but Gail is being very supportive. Those police detectives are a laugh. The female one is very good but the other guy just sits there glaring. He never says a word, not a question, not even conferring with his partner. Creepy.