(This post was originally posted by David (Clinkers) on the Coronation Street Blog in June 2016, reposted to this blog with permission.)

A week of monumental change for the United Kingdom then but whatever's happening in the world, Corrie continues. We were treated to the gradual unravelling of Sarah Platt, a rare moment of a grouchy Roy Cropper and the tedium of the Macs' Marriage.

Of course, the UK has known a referendum moment once before, way back in June 1975. Did Corrie offer up something to soothe the minds of voters?

The episode ones in a very dowdy looking Rovers with Betty wandering around and yawning. She's staring at a table in the snug. She's hearing voices. Has our Betty been helping herself to an early morning tipple? As we discovered in 2012, the woman had spent decades nicking pint pots so anything is possible. 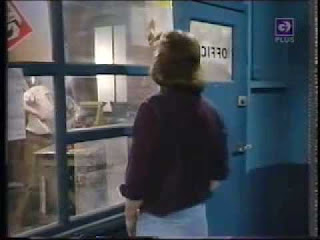 The action, such as it is, moves to Len's yard where everything is painted blue - walls, furniture, Deirdre. Actually Deirdre saunters in decked out in some awful, short purple number and almost blends in with a filing cabinet. She banters with Ray whose hair is longer and glossier than hers. Ray uses Vosene and lots of Silvikrin hairspray. As was the norm back in days of yore, Ray sneers about everything and everyone. He turns his ire on poor old Jerry Booth who, he claims, is desperate for people to like him. 'They do like him!" counters Deirdre.

Back at the Rovers, Bet is hurling beer mats at tables with gay abandon. She's having a mini row with Betty about having a night off. Perceptive as ever she asks "Is owt the matter Betty?" Yes it is. Our lady of the hot pot has encountered a ghost. In the Snug.

Over at number 3, it's an ordinary day for the Bishops as Ernie stamps on his own specs causing Emily to wring a tea towel in distress. OK so it's not quite Sarah Platt's descent into confusion but these were gentler times. Re-run nowadays, the scene would have Ernie shooting the specs and then blowing the entire room up having strangled Emily with the aforementioned tea towel. Anyway, back in 1975, Albert wanders in and laughs at the broken glasses. It soon transpires that Ernie is about to appear on local radio. Albert doesn't know if he can get local radio. What? Does his radio not pick up signals from any further than Jubilee Terrace? We are then treated to an scintillating piece of drama where Ernie rambles on about the local rates whilst Albert snaps back with a tirade about being a pensioner. A random bloke in a jacket then arrives with Alf Roberts and Ernie screeches something about not being tense. I would be though, having to face the Bishops' filthy green paintwork every day.

At the Blue Yard,  Jerry is having a swarfega moment in order to rid himself of the gallons of oil emanating from Deirdre's bike. Len's got his feet up on the blue desk and is grumbling on about people not working. He then gets up, cackles at the bike for no reason and leaves. We are none the wiser. 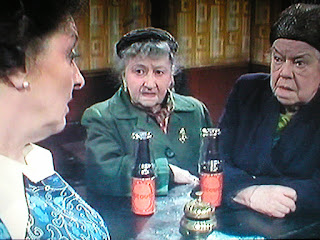 Meanwhile Deirdre has hauled her horrid frock off to t'Rovers and is chatting to the woeful Betty. Deirdre wants the dirt on the Rovers ghost who turns out to be a woman. A woman with a thirst for a milk stout . . .  Ena and Minnie enter stage right and suddenly there are too many people trying to crowd on to the set. One man lingers in the doorway, unable to get in. "You've seen what lass?" Ena demands of Betty. Lass? Betty mumbles on about a beret and a pair of glasses before recounting so much information about Martha Longhurst that she must have been rifling through the archives in-between scenes. Betty's face fades and it's End of Part One.

Part Two and we're in the Corner Shop where a sign reminds us that 'A Pinta fills the energy gap'. Thank you Milk Marketing Board. Blanche Hunt (nasty blouse . . .) is serving Albert whilst shouting to Tricia who is off-set somewhere. Jerry arrives, still covered in filth, and Blanche manages to offload an elderly tongue barm on him. Be still my beating stomach. Tricia shuffles on to the set clutching her transistor radio prompting Albert to start banging on about 'local radio' again.  "Yes!" screamed Tricia, "of course it receives local radio you stupid old git!" before jamming the radio under his cap. That didn't actually happen. Instead she hands the transistor over just as Gail arrives, sporting some other blouse from hell. It must have been 'tat week' at Sylvia's Separates. In one of those 'Acorn Antiques' moments, Gail barges past Albert, leaves the shop and then attempts to come back in just as Tricia is making her exit. We catch a glimpse of the till which shows us that Jerry's tongue delight cost 50p which is about £400 in current money.

In other news, Ernie sets off for his stint on 'local radio' where he is going to fill the airwaves with some Watergate-style expose on the local rating system. Ken's not bothered as he's too busy calling Betty a loon and rubbishing her ghost theories. "Well, I can't help thinking that she must be troubled" offers Minnie. She's talking about Martha not Betty.

Back in the yard, Ray is totally owning that double denim look and there's some serious flirting with Deirdre until Jerry, minus tongue barm, appears and advises Deirdre that "there's no point in biking on your back with your legs in the air". A lesson there for all of us.

The excitement in the Rovers reaches palpable levels as we hear Ernie debut on 'local radio'. Emily nods along to his utterances in a slightly off-putting way, in the company of the random bloke. Well, that's Emily for you. Anyway, Ernie argues with the man from t'council as Ena and co huddle around the transistor and we get a lovely close-up of Minnie's table cloth (brown like everything else). Ernie is considered to have been a success although little does he know that dark forces are working against him. At number 3 there's sherry for everyone and Ernie lets rip with a battle cry of "The next thing is to stop Len from going to Torquay!" Hurrah!

A nice little episode with a tiny cast involved in many of the scenes. The programme was brought to you by the colour 'beige' and the cast's clothes were provided by the remainders section of Empire Stores catalogue.