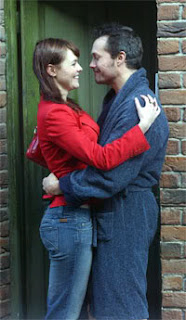 (This post was originally posted by Scott Willison on the Coronation Street Blog in July 2016, reposted to this blog with permission.)

There was an important anniversary recently on Corrie.  On the 3rd July 2006, Charlie Stubbs bought number 6 Coronation Street as a home for him and his fragrant girlfriend, the delightful Tracy Barlow.  Yes, ten years ago today.

That's not the anniversary I'm talking about though.  No, what's far more important is that it will mean it's almost ten years since Tracy Barlow put up that awful wallpaper in the living room of number 6.

Of course you know the one I'm talking about.  Pastel blue and white, a mix that swims round the back of your eyeballs like you're experiencing an extremely polite LSD trip.  Perhaps it was a good choice in 2006.  Sandi Thom had got to number one with "I Wish I Was A Punk Rocker (With Flowers In My Hair)" in June of that year, so there was clearly something weird going on in the national psyche.  In 2016, that wallpaper is a cause of revulsion, frustration and anger.  For me, anyway.

I realise some people don't redecorate very often.  Emily Bishop has had the same wallpaper in her front room since the Cretaceous Period and that's fine.  In fact, I'd be a bit annoyed if Linda Barker suddenly turned up and told Emily how to brighten her nooks with some stenciling.  My point is, there have been three families living in that house since 2006, and none of them have thought "maybe a splash of magnolia would cheer the place up and distract us from the fact that a man was clubbed to death in this very room".  They've all been so lacklustre about changing the decor, I wouldn't be surprised if there's still a bit of Charlie's brain on the bordered Axminster. 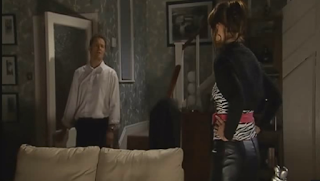 First came Jerry Morton, better known as Sinbad from Brookside, who found enough money to have a crane lower a summerhouse into the back garden, but couldn't be bothered to nip to Homebase.  Mind you, he bought a three bedroom house despite having five children so clearly he wasn't the homemaking type.  The hideousness of the Morton family, with their many disparate children of random ages and their haunted grandfather, actually proved an effective distraction from that nasty blue and white pattern on the wall.  For a year they bellowed at one another, trying to summon us some kind of familial chemistry, before they were dismissed as a bad lot and shipped off to Spain. 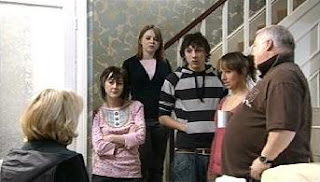 Admittedly, the Windasses were initially tenants at number 6.  Most landlords don't like you blu-tacking posters to the walls, never mind a comprehensive redecoration, so you could understand why Anna didn't rush to do the place up.  But in 2011, Owen bought the house, and soon he moved in with Anna.  Owen was an actual builder.  He could have put up some cheery striped vinyl in a couple of hours with very little fuss - or at least, he'd know a man who could.  And yet that wallpaper carried on,  Anna mithered him about many things over the course of their relationship, but she never once demanded that he get busy with a scraper and some sugar soap. 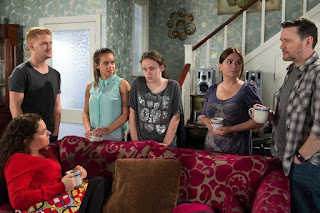 Remember, during the same period, Ashley and Claire redecorated number 4 so comprehensively they actually moved a staircase.  But no-one had even the slightest inclination to pull down the pastel covered migraine at number 6.  I mean, look at that sofa: it doesn't match the walls at all, and everyone just lives with it.

The house was finally bought by the Nazir family, and I thought, "hurray!"  Surely there would be a radical change under the new owners?  After all, this was a family who clearly had a bit of money, a bit of class.  They wouldn't want to carry on with someone else's decorating mistakes. 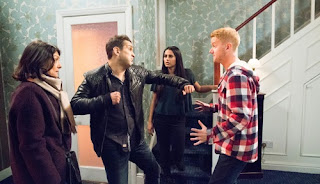 Nope.  Yasmeen is clearly a woman who knows what she wants and frequently gets it, but all she seems to have bothered doing is chucking up a few paintings and getting a "summerhouse" built out the back.  And here we are, ten years later, still staring at that turquoise nightmare.  I'm starting to pray for a horrible fire - not because I have anything against the Nazirs, but because that might actually make them redecorate.  Surely Sally would see this as an easy win in her fabulous war of snobbery with Yasmeen?  "I never thought a respectable lady like you would take interior design tips from a convicted murderer."  Speaking as someone who has mercilessly judged my neighbours for crimes as minor as putting the toilet roll on the holder the wrong way round, I can't believe Weatherfield's own Margo Leadbetter wouldn't leap at the opportunity to get one over Mrs Nazir. 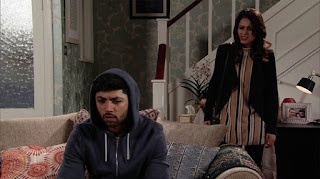 Perhaps it's a trick on us, the viewers?  Perhaps, like Nicky Tilsley's on-off brain injury and the continuing existence of Robert Preston, this is a test of our loyalty.  "Let's see how much of that wallpaper they can take before they start switching off."  Well, you've broken me, Corrie producers.  Never mind a sixth episode.  All I want from the Street in 2017 is two coats of Farrow and Ball.

I'm watching the UK timeline...but pretty much the day after you posted this we saw the Nazir's interior....it's updated!!! Wall paper is gone and there is some built in cabinetry. I'm assuming they got more work done when their 'oranger' was completed :)