Caz - your time is up! Please pack your kit and leave 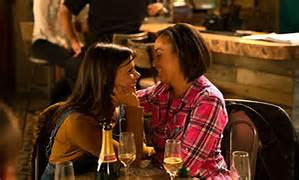 (This post was originally posted by Ruth Owen on the Coronation Street Blog in July 2016, reposted to this blog with permission.)

Yes, you Caz - it is now your time to depart the cobbles. There, that's told her. Now, let me explain why she has to go.

Caz Hammond, who arrived in November last year, has no further reason to remain in Weatherfield. Kate has told her, in no uncertain terms, that she doesn't want to see her any more and that she no longer loves her.  No doubt though, Caz is living in hope that Kate will change her mind, fall in love with her again and they'll get married. It seems unlikely.

Caz has lied repeatedly about her parachute training accident and hobbled around for several months trying to maintain the lie. Both viewers and Kate have now discovered, due to the arrival of the army's representative, who spoke of the forthcoming court martial, that Caz sustained the injury due to a fight. She is due to attend a court martial concerning the incident. According to Caz,  desperate for excuses, the girl she fought was making homophobic comments and so Caz tore into her. Hmmm. 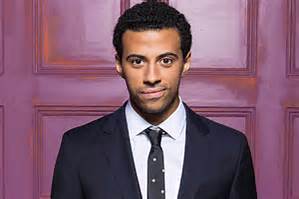 Luke is not at all happy about the fact that Caz is staying at Maria's flat and he has made his feelings more than clear to Maria: 'She's a nutter!'

When Liam was playing with his toy car it ran over Caz's ankle, but Caz reacted as if a truck had run over her foot and not just a child's toy. Luke then informs Maria that he found a painkiller Caz claimed to need, down the sink. No wonder then that Luke is intolerant of Caz's presence. Sophie is also a good deal less than convinced about Caz's parachute training accident.  Maria has been told, in no uncertain terms, that Caz is playing her, but Maria refuses to listen and is all sympathy, telling Caz that she can stay in her flat as long as she needs, to sort herself out. 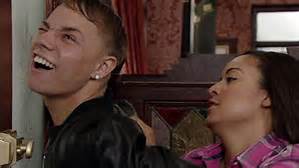 In the Rovers, Kylie's killer, Clayton, was pestering Kate. Caz, seeing red, rounded on him and fought him off. A good deed in itself but one which clearly revealed that her ankle was perfectly fine. Caz did try to ham it up a bit when she realised she had given the game away, but it was too late. Kate, shortly afterwards gives Caz her marching orders (bit of a pun there!). Caz wails, 'You're all I care about, all I've got left. She adds, 'My love life's in tatters and my career is hanging by a thread!'

What we don't yet know is almost anything about Caz's background. Might there be a clue in her past life which would explain why she seems so deeply troubled? If so, it would be interesting to find out.

Sadly, the relationship between Kate and Caz, in my view, failed to convince. This is not a criticism of each individual actor, just a comment on how some screen relationships don't quite hit the mark of credibility. Much of their time together, unfortunately, appeared forced and contrived.