REMEMBER, CBC is airing DOUBLE episodes of Coronation Street this week and next week. 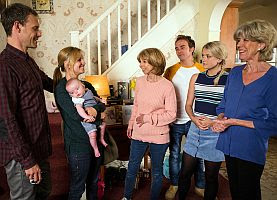 Sarah leaves the hospital and refuses to return, because her family needs her. Billy conducts Kylie's funeral which Max helped contribute to. David's heart is filled with revenge. Todd confronts David but is shocked when Sarah confesses who really killed Callum. Eileen discovers Billy and Todd's relationship. They promise to tell Sean but he finds out by accident. Phelan oversteps the mark and has some sucking up to do. Sean gives Eileen an ultimatum. Phelan cozies up to Sally to win council favour.

Michelle is excited about her baby plans with Steve. Eileen worries about Jason in Thailand. Macca threatens Gemma but Craig steps up. Robert struggles at the Bistro. Craig makes a change in his career choice. Ken is jealous. Gary decides to reunite with Izzy, but Anna's not best pleased. Nick threatens to open a rival restaurant until Leanne convinces he and Robert to make peace. Beth worries her past might affect Craig's future. Johnny rents a love nest. Eva gets the wrong end of the stick.