The Wedding of Mary and Norris 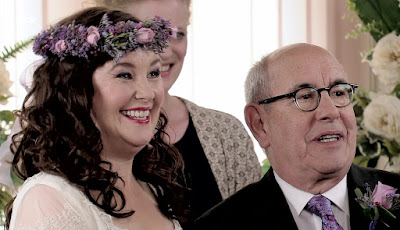 (This post was originally posted by Tvor on the Coronation Street Blog in August 2017, reposted to this blog with permission.)


The Bride wore flowers in her hair. The Groom shook her hand when they were declared married by our favourite recurring Registrar. Yet this marriage may last longer than some recent ones that didn't get past the reception. Norris and Mary said I Do and then things nearly went to hell in a hand basket when secrets were unfurled like flying a glorious flag.

I loved the wedding scenes, the angst of the bride and groom knowing it was a sham and a scam in hopes of winning a competition, knowing they were lying to many of their friends and family. I think if Jude hadn't come so far for the wedding, they probably wouldn't have felt so bad. But that's what happens on soaps. Jude had to come to Weatherfield so that he could find out that his father wasn't the romantic lover that Mary had painted him to be. He may not want to get to know his father's family any longer but he wants to get to know his mother better. I'm not sure if his wife agrees.

You can see all of the wedding  notes with lots of screen captures on State of the Street.

It was one of the more unique weddings and I thought it was wonderful! What say you?