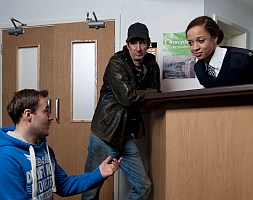 There's an interview with Alan Halsall over on Digital Spy today. He talks about working with Natalie Gumede, who plays Kirsty, and how he sees Tyrone and Kirsty's future working out.

We know that Tyrone is going to propose to Kirsty after he mistakenly believes she's having an affair. This comes from Tommy and Tina getting the wrong end of the stick and of course with Tyrone's history with Molly, he's going to be exta-sensitive to suspicions of that nature. When he finds out she was only planning a romantic Valentine surprise, he thinks he's going to lose her and plans a grand gesture, proposing to her at the police station.

Alan reckons that Tyrone still realises there are problems but thinks a proposal can make them all go away. He's not too keen on Tommy and Tina, either, for interfering but Alan says Tyrone is a forgiving sort of bloke and it will probably blow over soon enough. He's looking forward to seeing what happens when Terry Duckworth lands back in town since he and Terry have had some contentious history.

When asked about the appeal of Tyrone, Alan says: "I think it's because people can relate to him. That seems to be true for all sorts of people - there's ladies who want to mother him, young lads seem to get him too, while other people will know somebody like Tyrone." And I think that's spot on. Tyrone is a regular guy, isn't he? He's everyone's mate, everyone's wing man, the solid and loyal sidekick.

Tyrone's one of my favourites and Alan Halsall is a really lovely man, from all accounts!