I'm back! Did you miss me? (Lie if you have to!) Just in time, too, so it seems because Corrie is really heating up. 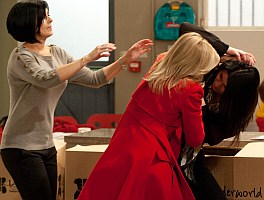 Carla still isn't getting on very well with Simon, is she? And picking him up while she'd been drinking didn't help matters. Brian really felt like sticking his boots in over Carla and Simon and I suppose he could make a case but she was hardly falling down drunk. I don't blame Carla for being angry that Julie and Hayley had a word with her about it rather than Brian but she dove in and shouted at them, assuming everyone was gossiping when they weren't. They will now. And it gives Frank more ammunition. I also can't blame Peter for being furious that Brian was talking to all and sundry about the situation and now it's common gossip in the shops. Sally is always so pleased to be able to castigate the people she has a grudge against. First it was Fiz and now it's Carla. Carla's self defence to Peter's accusations didn't really do her any favours.   Funny though, I just don't buy Stella as a crusading mother lion.

Now Leanne's back. First just to get her stuff and go again but even that ended up in a slagging match with Carla but i think Leanne came out the best in that. I think her point about Peter being addicted to Carla is spot on and it threw Carla didn't it? Seeing Simon delayed her departure and that's all it took. Simon pushing buttons and telling lies, exaggerating Carla's behaviour and then saying Carla hits him added to the mess and sparked Leanne into a fury and she's the mother lion now. (You notice she called Stella "Mum"?) It's put Carla's position into disrepute with a few more of the neighbours but Simon's lying and even then, it doesn't seem to sink in to Peter what all this upheaval is doing to the lad.


Carla is desperate to get the order from Jenny who says she won't deal with her unless Frank is out of the picture. Why doesn't Carla just start up on her own, she suggests. She'd make it worth Carla's while. Hmmmmm.... Where did that all come from? And he's starting to act kind of cool to Sally, especially after she saw his email to his lawyer asking what would happen if he sacked the workforce which is what he's planning to do but he's very smooth about it. I do think her conscience is pinging her a bit but there's going to be a lot more alarm when she finds out he's in cahoots with Jenny! It all makes sense now.

Well. Frank stayed overnight at Sally's! Sally is doing some home cooking for Frank, but it's all pre-frozen meals for 2. He doesn't seem enticed. He should feel lucky it wasn't fish fingers and beans! He doesn't seem like the type of man who would really find all that domesticity all that appealing, does he? 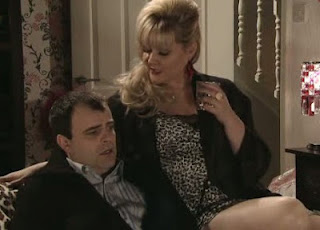 Yep, Tracy should be contributing to the mortgage if she's living there. Modern marraiges are like that, 50/50. And Tracy isn't spending a penny of any money she might have, mainly Steve's child support i think, and her idea is for him to increase the amount so she can pay her half. Um. Anyway... Steve decided to unwall the downstairs and move Beth and Craig in! Brilliant! and a pet rat named after his dad!!! At least Steve will be out of that house and into the taxi flat but Tracy and Beth will not get along, you can see that. Tracy continues to be completely delusional about hopes that Steve will come around. I really really hope he doesn't.

Well let's see. She won't pay half the rent, Steve is pretty much broke, why not have housemates? It's her own fault. I think this has the potential for some great stuff. We've already had Steve looking at Beth's "glamour" portrait in horror and the nearly  mute Craig stuffing his face and playing with his pet rat. And Tracy tried to use Beth's crush on Steve to push him. That was hysterical but you know? Beth actually looked really nice, i thought. 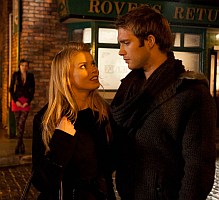 Kirsty's jealousy is leaking out again. It sounds like her ex was a bad 'un. Could that be why she's so possessive? Tommy is dating a Barbie doll who has their future all mapped out after one date. Talk about making a man run a mile! And isn't Tina enjoying it!?

Kylie seems to have made friends with Lewis or is she just trying to dig up the gossip. And Lewis certainly made points in Kylie's eyes by sticking up for her over Brian's wibbling about Max's lunchbox. Whatever happened to school dinners? And every time she sees Brian and he confronts her about it, he's eating unhealthy food of drink! Kylie is encouraging Audrey to listen to her heart and Gail's pushing for the head and it looks like Audrey's leaning to the heart. She just can't keep away from him, can she?

Brian seems to be Ken's new BFF. I guess as a fellow teacher, Brian feels they have something in common. Owen is offering to get rid of the pond and rebuild a shed and now Faye says she wants to keep the pond! So they did and tarted it up to a high degree of tacky.

Katy's really struggling isn't she? She took off but you knew she'd come back. Lots of new mothers have a difficult time coping but a 16 year old doesn't have the maturity to back her up for the most part. Looks like everyone will help out now and that's good. Maybe she did make a mistake having a baby so young but wee Joseph is there now so everyone pitches in. Owen gobbing off only made it clear that he is going to be the tough nut to crack. He needs to back off and just be supportive. Saying I Told You So does no good. Chesney's right, Owen wants control, he wants it all his way. Poor Chesney is at the end of his rope, coping with the baby alone. I did like to see that he apologized to Faye.