The Coronation Street factory name Underworld seems to be more appropriate than you might have thought. Anyone who works there caught saying "this factory will be the death of me" better watch themselves. That's more of a jinx than they know!

People have died there over the years and it is about to be the scene of one more death (revealed at the end of the post). 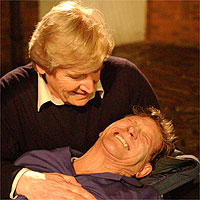 The problems seem to have started when original owner Mike Baldwin expired on the factory steps in the arms of his rival, Ken Barlow in April 2006.


When the Connor brothers took over after Danny Baldwin and Adam Barlow were persuaded in turn to sell out, that little cloud of death over the factory started raining down.


It was April 2007 and the Brothers Connor hired a group of Polish women to work in the factory.  At the time, Carla was trying to get her own line of clothing started and a few of the new workers agreed to work at night on that order, in addition to working their regular day shift. Early one morning, Kasia was trying to carry too many boxes down the stairs and missed the top step, crashing down to the factory floor and she died. Her death was covered up so that Health and Safety wouldn't realise the long hours she'd been working.


Come forward a few years to 2008 to Tony Gordon's term as one of the factory owners. After putting a hit out on Liam Connor for having an affair with Carla, Tony nearly killed pensioner Jed Stone. It was a near thing but Jed survived to tell the tale. Tony nearly killed Carla when she found out and put two and two together, realising that Liam's death was Tony's fault. She left Weatherfield but when she returned, she and Roy pushed so many of Tony's buttons that he broke apart, nearly drowned Roy and then turned himself in.


The next death comes into play when Tony escaped from prison in June, 2010, intent on revenge, and held hostages in the factory. He shot his henchman first, and then decided to set fire to the factory, trapping himself and Carla inside. Carla managed to escape but rather than allowing himself to be caught, Tony stayed inside and when the petrol cans caught fire, the factory exploded and took Tony to "Underworld" for good.

Barely a month later, however, another dead body was entombed under the floor of the factory when John Stape hid the body of Colin Fishwick in a hole in the factory during the reconstruction after the explosion. The body was wrapped in a rug and the builders poured concrete in the hole to rebuild the floor. The better part of a year later, the body was discovered when a drainage problem resulted in excavations, John himself being the one to dig up the body before anyone else could find it.


The latest death is set to be Frank Foster, partner in the factory with Carla Connor. How he will be killed has yet to be revealed but the scene will probably be set with a number of potential candidates as the murderer.


So, did Mike Baldwin start this all off or is this the Curse of the Connors? Maybe Carla ought to get out while she can!

When last in Manchester I saw the new corrie set site at Media City coming along, though it still doesn't look like much. Will be interesting to see what else might be blown up on the old set ;)