Museum will not take on the Coronation Street set 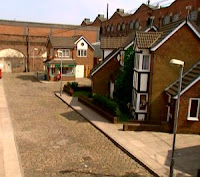 When we knew that the ITV studios would be moving to the new Media City in Salford, we wondered what would happen to the outside Coronation Street set. There were rumours and hopes that the neighbouring Museum of Science and Industry might take it on but according to an interview with the museum's new American director, Jean Franczyk, it's not going to happen.

She says "There's going to be someone out there who is probably the best in the world at running a Coronation Street visitor attraction but,” Jean M Franczyk pauses theatrically, “it’s not going to be the Museum of Science and Industry in Manchester. That's not our role. We have so much work to do in celebrating the historic site and contents we already possess. Coronation Street is for someone else."

That's a pity but maybe someone else will take on the set and open it to the public as a Coronation Street experience, complete with working pub and a gift shop in the Kabin! Now, where's my lottery ticket....