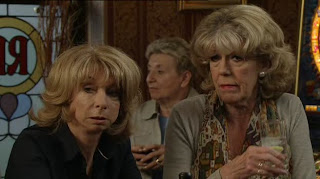 (This post was originally posted by David on the Coronation Street Blog in February 2012.)

Tonight’s scene stealers had to be Gail and Audrey and their trip to see Dr. Carter in the medical centre after poor Audrey went all woozy.

I’ve always loved these two characters, I think they are funny, classic Corrie women and in an otherwise dull two-parter I think they really livened up the show tonight. The scene in the kitchen where they were challenging each other to bin the booze was a particular highlight of mine.

Obviously the whole alcohol ban storyline has been set up as a plot device to bring a returning character back into the frame (not saying who!), but if it means seeing more of Gail and Audrey over the next couple of weeks then I’m game. We haven’t really seen that much of them recently so it’s nice to have them onscreen for a bit, even if it is for silly scenes such as tonight’s and Friday’s worst surprise party ever in the back room of the Rovers.