Sneak Preview of next week's Canadian Corrie, May 7 - 11 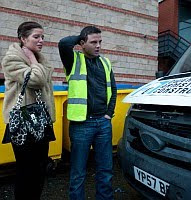 Paul has a housing crisis and Eileen offers hers. Is that such a good idea? Rosie has a dream job offer...in London! Will Jason go with her? Katy is struggling with the baby but Chesney is working too hard to help much. Katy takes a chance. Tina rents a flat and ends up with a roommate or two. Tommy thinks he's caught Kirsty in a lie. Nick makes an effort.

Brian reaches out to Ken and confides a secret that could devastate he and Julie's relationship. Simon hates Carla and shows it. Audrey has a health crisis.

For more detail and photos, see the Moosejaw Mercury at Corrie.net