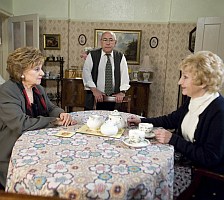 David's world is shattered but he decides on revenge instead of confrontation. Stella sets a date. Ryan is feeling trapped. Is Chesney using Sinead? Tina has reluctant supporters but the pressure is building on her and she's feeling more and more guilty about what she's doing. Emily's accident has her suffering Norris the Nursmaid's hovering. Roy is frustrated by what seem to be practical jokes at his expense. What's really going on?