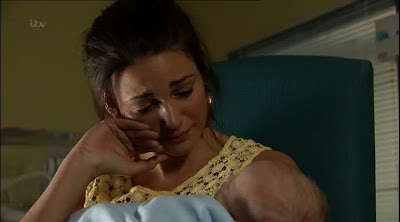 Pulling rank award: Tina decided she'd be the first one to hold the baby.

Quest award: Dev is deep into obsession. He's right of course but he needs hard evidence. And telling the police your friends think you're crazy isn't going to help.

Exhibit A award: I suppose Marcus has a point. If he takes Maria to a wedding as his new partner, she really is going to be the center of attention and not in a good way.

Foot in Mouth award: Sylvia joking to Tina about giving her son away. Oops.

Passive Aggressive award: Sean managed to let Maria know about the wedding by making small talk about it to Audrey.

Insecurity Fail award: Maria is really worried about her relationship with Marcus. 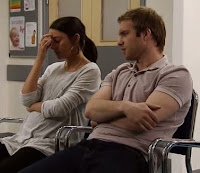 Inevitable Award: Tina might have been able to hand over the baby if he hadn't got so sick.

Lines of the Week:
Lloyd "Not one for tidying while you go"
Gloria "She was drunk as a skunk and intent on murder" (she was NOT intent on murder!)
Carla to Rob "It's Mr. Alkie to you"
Carla "Tracy Barlow?" Rob "Yeah. My worse half"
Karl to Dev "I know for a fact that you will be the one that will suffer. You. And your kids" (sounds ominous)
Michelle "Tracy, anyone with half a brain could fool you"
Sylvia to Roy "We are not about to be decimated by bubonic plague"
Sean to Eileen "See ya, you old scrubber"
Eileen "Deirdre Barlow, are you a man or a mouse?"
Deirdre "They tell many stories, my belts"
Tina "I'm selling my baby. I might as well stick him on eBay"
Audrey to Tracy "Hard work is hardly your forte, is it?" and "It's not easy being told where to go every 2 minutes although you are certainly used to it