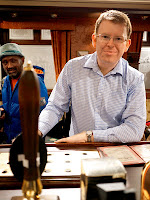 (This post was originally posted by Graeme N on the Coronation Street Blog in May 2013.)

In part two of my report on my very exciting trip to Weatherfield, I'll be bringing you up to speed on what Stuart Blackburn had to say about Coronation Street under his tenure. I'll also be filling you in on what happened when I joined the journalists for round table interviews with some lovely Corrie actors, and finally I'll bring you one or two interesting (and slightly unusual) titbits.
So to begin...incoming Corrie producer Stuart Blackburn used one word to sum up how it feels to sit in that particular hot seat - awe. Mr Blackburn very obviously has a passion for the Street. He spoke quite movingly about what it means to him and where he wants to take the programme while he's in charge. Stuart said he felt honoured to be working with such an outstanding cast and crew. His vision is to maintain Corrie's position as Britain's best television drama, highlighting its down to earth, working class roots and not forgetting the impact it originally had back in the 1960s. 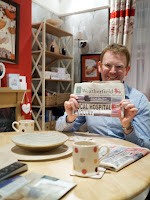 No major spoilers were revealed, although the next few months will see certain storylines peak. The Platt’s will feature heavily – Nick and Kylie’s secret will grow (poor David!) We will also see more of the Price family as Stella and Karl move their relationship to the next level, although there may be a few surprises along the way. There will also be more of Carla, Peter, Rob and Tracy as well as the development of the major storyline focussing on Roy and his family. I’m sure regular blog contributors will all have thoughts on these!
Now the thought of round table interviews with regular journalists put the fear of god into me I freely admit. We gathered in groups at three different tables while the actors rotated round us in pairs, while Stuart Blackburn listened intently from a safe distance. Unfortunately for me, most of the journalists asked what I would call safe, mundane questions – they were obviously very well-versed in the art of such things. I was slightly awestruck by the entire event, however there were a couple of interesting moments! 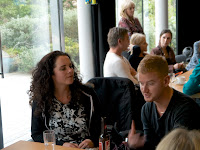 First up were Stella and Karl, aka Michelle Collins and John Michie. When the journalists introduced themselves, they missed me out (!) so Michelle locked eyes with me and made sure I was included. When I said I was from the Coronation Street Blog, her immediate reaction was to ask whether I was the nice or the nasty blogger! I was like a rabbit caught in the car headlights! Before I could reply, John Michie stepped in and confirmed that as I was a fellow Scot I must be the nice one! I wasn’t going to disagree! 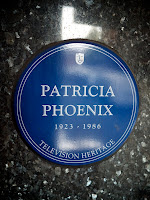 Next up were Cherylee Houston and Mikey North (Izzy and Gary). I really warmed to both these actors – I could have listened to them for much longer. They both very obviously care about their characters and the street in general and were keen to point out how much they had learned and how far they had developed since they arrived on the cobbles.
Finally we met Michelle Keegan and Chris Fountain (Tina and Tommy). By this point I was becoming a tad frustrated with some of the questions my journalist colleagues were asking so I stuck my brass neck out and asked one of my own! All the journalists were asking the same kind of questions about what it was like to work with a baby, how the actors felt about their characters’ storylines...so I chipped in with the last question of the day. I was keen to hear what these younger actors felt about working with Corrie legend, Barbara Knox (Rita). 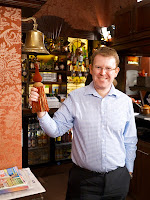 I was really impressed by how genuine both Michelle Keegan and Chris Fountain were in their replies. Both actors are clearly in awe of Barbara and rightly so. As you would expect Ms Knox is always on time, always knows her lines and never, ever makes mistakes! She is also a very giving actor, helping these younger actors develop and refine their characters. I got the feeling that although both the actress and the character are legendary and much celebrated, the lady behind the Queen of the Kabin is actually very down to earth and normal, while also quietly demanding a bit of respect. And fair play to her I say! Their final comment was that everyone knows when Barbara Knox is on set! I bet she has the same wonderful aura about her that the Street does when you first experience it.
And finally, some interesting little titbits for you: