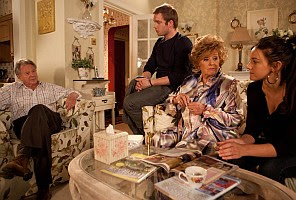 Tina  should have revealed her news before Izzy got to  hold the baby. It made it that much worse. And why do they always end up with these big confrontations and arguments in the maternity ward in the hallway? I can understand how Tina feels but morally, I have to say she's wrong on this one. I do notice now, that Izzy's done an about face and is thinking Tina did try to encourage Gary's affections. And as angry as Izzy and Gary and Owen are? I'd be more afraid of Anna!

Oh here comes Rita. Time for another row in public. Just because they share a few genes doesn't make the baby theirs? Um yes it does. He doesn't have any of Tina's genes. Looks like there is going to be a court case over it and rightly so.  All this with Tina has really brought the cow out in Anna, I must say though she's probably justified to some extent. She's got a really nasty side to her when she's riled while Izzy is quietly determined and consulting lawyers. I guess Anna's forgotten all about Faye. Has anyone told her about the baby? Rita is supporting Tina on the surface but doesn't really think she's doing the right thing but there's no telling her. I don't think two old aged pensioners are really going to be much help with Tina and the baby.

Now, Izzy is determined to destroy Tina's reputation and she's started on Tommy's insecurities already, implying that Tina's just using him. That's really going to make her look like an upstanding citizen isn't, I don't think. Izzy is afraid she might have another miscarraige if she tried for a baby, but she might not, too. In the meantime, Owen has evicted Tina from the flat. She was living there rent free so maybe she doesn't have any rights as a tennant. Tina and Tommy both now staying with Rita and Dennis until they bring the baby home. All these tiny flats seem to have so much room! 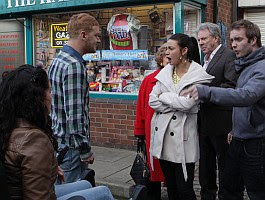 Now the outbursts have moved from the hospital corridors to the street and other public places which gives the neighbours free reign on the gossip mill.  *sigh* That's going to get old really quickly. But Gary is latching on to Tommy's doubts even though he insists he's going to support Tina. To combat Tina,  Gary and Izzy are back together but it's going to look like they did it just to get the baby back. Rita and Tommy are trying to question Tina's real motives and she's feeling like they're all against her.

Tina decides she isn't going to pay Owen back after all because she'll need the money to pay for the court case they're throwing at her. Tommy is sticking by her but still points out that she's doing the wrong thing. I feel for her but this is what she agreed and biologically, Jake isn't hers and it's unfair to back out of the deal now. I wonder how long we'll have to suffer everyone shouting in the pub and on the street corners? With any luck, Tina will see the light. It'll still be hard for her to live there and see the baby but it's worse for Izzy and Gary watching Tina bring up their biological child. Well if she does give the baby back to them in the end, at least she can keep the money!

Leanne is still choking on having to have Karl as a step father. Talk about an awkward social drink.  Tracy has a job and it's cold calling and trying to sell toilets no matter what she pretends it is. And she's rubbish at it, as you would expect.  Rob says he's found a job, too, but there's no job title. Asset management, debt recovery... Repo man and kneecap cruncher from the sounds of it. Then Maria is her own worst enemy, isn't she? I cheered when Audrey accused Maria of being annoying, fussing over the same old same old when she really has nothing to worry about. She's so right! Marcus really tried to make things right with a nice dinner and pressie. It worked. That leisure suit/onesie thing Paul was wearing today? Sean was wearing the exact same one a week or so ago. Who was borrowing whose clothes? 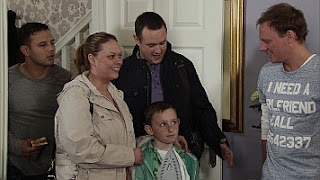 Now there's news of a big fire and Eileen is freaking out again. That's the last thing she needed to hear even though it ended up that Paul was ok. Finally, it's out in the open and Paul knows she's not coping. Paul lied to Eileen that he wasn't near the fire but the child he saved came to thank him. Busted. Paul thought there might be a kid inside because of the bicycle in the yard. Do you think the screaming mother might have been a clue?

Would you think that the fire department might have family resources for partners of the fire fighters having to deal with the worry? Well they do but it took an awful long time for someone to mention it! Maybe this is the catalyst that lets them move forward and she can find a way to deal with it all because Paul doesn't seem to know how to help which I find baffling considering he was married to Lesley for all those years. Surely she worried?

Dev's theory is that Sunita heard the fire alarm and came to see if there was anything she could do. Good theory. Wrong. Stella keeps having doubts which doesn't sit well with Karl so he had to work on Dev a little more and the more he does, the more likely Dev is going to get suspicious, I think. Dev really does have that air of obsession doesn't he? He is right, of course, but it's taking over his life. Lists, timelines, notes, it's all going around in his mind over and over and Karl is getting more and more worried. Dev has discovered that there were keys when Sunita got to hospital but he's not dropping the quest. Mind you, she didn't have a purse or handbag with her so they must have been in her pocket. 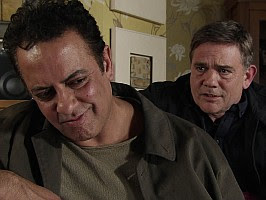 Karl's really freaking out because he knows Dev is onto something with the keys so he's going to be Dev's new best friend. Karl nearly beaned him with Aadi's golf trophe before that, though. It's wonderful watching him squirm and freak out. He was wearing gloves, Dev noticed and Karl made a very lame excuse that will be very easy to flush out. Mistake!!! He came very close and Beth and Craig saw him tossing his cookies in the ginnel. Gloria can see something is wrong with Karl but it's nothing she can imagine. She gave him the excuse he can use, flashbacks to the fire but he was so close to confessing there for a few minutes.

Gloria might be part owner of the Rovers but she doesn't exactly pull her own weight in the bar. She loves playing Lady Muck! Stella is still suffering post-traumatic stress and Karl thinks it has to do with all the upset Dev is causing. Mary really told Dev a few hard truths. From her perspective, those kids are being bullied at school and if Dev settles down, moves on and helps the children through their grief, maybe they will settle down, too. Between that and Karl managing to talk him down, it looks like maybe he's going to give it a rest. Karl is still going round looking like he's about to have a panic attack and it doesn't help that Dev is now singing his praises for helping him see his quest to find out about Sunita's last hours is hopeless and was driving him mad. That, and him nearly bonking Dev on the head, really have seemed to put Karl even further into anxiety. 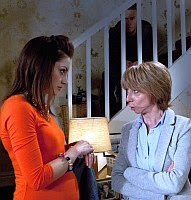 Kylie wants to do something nice for David, and Nick is helping her. But David has seen them from a distance with their heads together, and Kylie is hiding papers and making excuses, and lying and his suspicions are aroused. David is getting more and more wound up when he realizes that Nick, Gail and Audrey all know that Kylie's keeping a secret from him and they know what it is. Nick does admit she's planning a surprise and he'll like it (it's a night away) but in a completely contrived scene, he overhears Kylie and Gail explain the whole *real* secret, about the one night stand with Nick and how the baby might not be his. David's heart cracks wide open. Now what? It won't be pretty.

Strange things are happening in the cafe. Condiments in proper order. Roy has found the front door open first thing in the morning and has no idea what or who might be involved. Is it a poltergeist? Is if fairies? Is someone playing a trick on him? Is it Roy? That's my guess. I think he's sleepwalking from the stress. However, his theory about the keys was spot on and gave Dev a new lease on his quest. Beth pretended she could detect ectoplasm via a smartphone app. Poor Roy feels like the continual butt of the joke. Sylvia and Hayley don't know but they're concerned about Roy's state of mind.

Ryan is really getting that trapped deer-in-the-headlights feeling with Katy wishing them to be one big or small happy family. Now she's trying to set them up in Owen's empty flat and he looks like he's about to run for the hills!