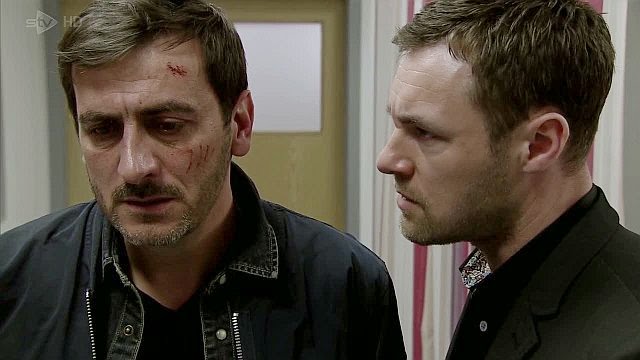 Knight in gabardine armour: Roy defending Carla to Peter. He's got so much dignity, our Roy!

In the doghouse award: Tim didn't come home for tea which turned out to be a wasted romantic meal.

Pariah Award: Peter's now the object of scorn of the neighbourhood.

If I Only Had a Heart award: Tracy actually seemed concerned for Simon and hugged him back!

Stylist fail award: The hair on the top of Faye's head most definitely doesn't suit her. Well, I think so at least.

Lines of the week:
Sally to Tim "She only lives next door, you could have shouted it through the wall!"
Rob to Tracy "Just this once, maybe it's not about you, yeah?"
Rita "They all go..."
Carla "It won't be the first time people have been gossiping about me and it certainly won't be the last"
Carla to Deirdre "I'm just the tiniest bit hacked off" and "You've already got one murderer in the family. It's not much of a stretch to think you might have two"
Steve about Peter "He wanted to bin her off, not bump her off"
Norris to Dennis "Softly Softly Catchy Monkey" (i.e. he figures Dennis is taking advantage to get back in Rita's good books)
Sally "I've been married. Been there, done that, burned the tshirt and the rest of the clothes"
Peter "I need to do something" Rob "How about you pick some hymns for your dead girlfriend's funeral?" (ouch)
Audrey about burglar Michael "I imagine he'll be full of flannel or self pity. Or both." (that's it exactly)
Roy to Carla "I think you would have made an excellent mother"
Sophie "Honesty is the best policy" Maddie "Ignore Bible Jane"
Julie advising Sally "I'm brilliant at this. Oh the irony"
Leanne "You're stupid. You're weak and you're a liar"

Who's Michael? I said to myself