In awe of Annie Walker 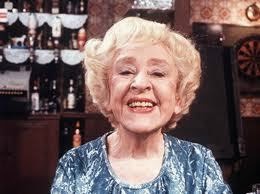 (This post was originally posted by Llifon on the Coronation Street Blog in January 2015.)


Blwyddyn Newydd Dda! It's three years today since I joined the blog! Can't believe it!

Yesterday, as there was nothing that good on TV I decided to watch The Stars of Coronation Street - 50 Years, 50 Classic Characters DVD once again, this time with my mum and grandmother. We fast-forwarded some clips as the characters didn't interest us but thoroughly enjoyed watching the clips of Eddie Yeats, Hilda, Ena, Percy Sugden, Betty and Blanche.

But the one character that made my mum smile fondly every time she featured in a clip was the wonderful Annie Walker.

A precursor to the classic comedy character Hyacinth Bucket, Annie is one of the most brilliantly played characters in the history of Corrie. While it is the likes of Elsie, Hilda, Bet and Vera that we remember for catfights, Annie could also dish them out, but in a much subtler way which I love. Just look at the clip below of Annie's classic put-down of Hilda in 1977:

She was the classic snob and the clip shown of her and husband Jack on the DVD is a Corrie classic, and hasn't been shown that often which is a real shame. She reminds me of certain aunts in my family or maybe people who live in my village - those who think they're a cut above but really they're not. When Annie went a bit too far with her snobbishness, the likes of Jack, Lucille, Len and Bet were sure to take her down a peg or two. And I loved how she used to separate the customers into two categories - her friends like Len, Ken, Emily and Alf and then the peasants like the Ogdens, Eddie Yeats and the Duckworths. I also loved how she used posh language to insult Stan or Hilda where they thought she complimented them!

It is a real shame that she departed the way she did. It is remarkable that Doris Speed was in her 80s and still made regular appearances in her final years. In the final clip on the DVD feature about Annie it shows her laying down the law to the Rovers staff and Doris was in her 80s then and what a strong performance it was. And I thought, they don't make them like that anymore! 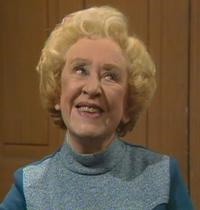 She was a megalomaniac but she wouldn't have fit in anywhere else apart from Coronation Street in my opinion. She soldiered on as a widow to run the Rovers and I believe there has been no landlady as good as her since. Annie's character would never age because snobs still exist in today's society as shown in present Corrie with Sally Webster. You could possibly not say the same about Ena, Hilda or Mavis even.

She was one of the big three originals and for me she was the best!

So let's raise a glass to Annie Walker of the Beaumonts of Clitheroe!