Poor little Max really can't understand what's going on. Neither can David, in some areas. But Kylie's out of communication to anyone and Eva's getting worried. My guess is that she managed to get to Barbados to Becky, at Becky's expense, likely. But nobody knows. Eva took David to the other pub and Callum told David that he and Kylie were back together. So what does David do? Break into Callum's flat. Very intelligent. Kylie's nowhere to be seen and isn't with Callum when he returns, having been summoned by Macca whom David paid to take him to the flat in the first place. Odd that she wouldn't be with him. There are threats and shoving and nobody really gets anywhere in the end. David is determined to make Callum pay for tearing his family apart.

David is getting advice from all sides, and all the same thing, too. Bad area of town, stay away! Kylie will come back when she's good and ready. Only David doesn't think she will and neither do I. He threw her out and didn't want her near him or the kids. I would think, knowing Kylie, that she would stay away, because she already thinks she's a terrible mother and wife. David isn't taking it lying down, though, since he now does seem to want her back. He went to the police to report her missing and connecting her with a known drug dealer. They must have been pretty quick off the mark because within hours, even less it seems, Callum was luring Max to the park just to prove he could to teach David to stay out of his business. But, the other upshot of this turned out to be that he doesn't know where Kylie is, either.

There's no sign of Kylie, the police can't find anything at Callum's flat so nobody knows what's next. Poor Michael feels terrible but it really wasn't his fault. David even tried Becky. No luck there, either. It was nice to see Nick being a brother to David. I guess they've got past that brain injury thing and Nick's fling with Kylie and ... etc. David has matured so much in recent years.

Sinead is making a basque for Beth and the wedding is only a week away. Kirk is getting the jitters but Beth is completely confident. She didn't really pick the easiest song to dance to for their first dance, which is usually slow and romantic. All Night Long by Lionel Ritchie really does go fast and slow and fast and slow. He can't decide what to dress up as, too many choices and that's adding stress. 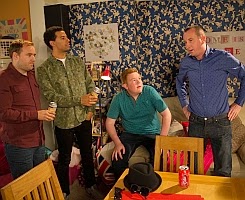 It's wedding week and poor Kirk seems to be fretting more and more. Nervous about dancing, public speaking and what to wear! Most of the guests haven't decided either with only days to go! Talk about leaving it to the last minute. Beth's family have arrived en masse. Don't know where they're going to all stay! Oh dear, mistaken identity. A shirtless Jason (he got wet fixing the radiator) is thought to be Kirkey. An understandable mistake, right? ;)

Awww but Beth's family is every bit as common and gobby and fun as I hoped they'd be, from the snarky grandma to the sister that's chasing anything in trousers (that's Sinead's mother, very different from her daughter!) But they kept comparing Kirk and he felt like he came up wanting. He was nervous enough to start with.Kirk is getting more and more upset as the week goes on. He, Ches and Craig and Tyrone all decided on the Blues Brothes, that's too many so will Kirk go with his first choice of Adam Ant? We'll see.

First comes the stag night and the hen night. Beth's party looked like lots of fun and they even remembered that Tracy is Beth's friend. Billy was mistaken for a stripper which was a hoot. But Kirk overheard Beth's relatives slag him off. Don't you just want to hug that poor man. He's got a heart bigger than all Weatherfield and it's just isn't on to insult him! He's decided he's not going to go through with it! He loves Beth more than anything and Chesney even says Kirk's his hero. Awwww... 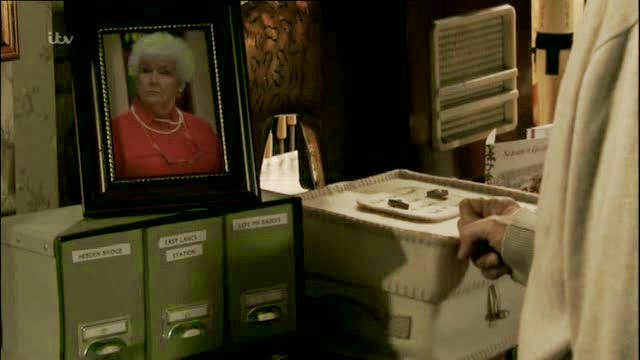 Roy has a court hearing. Aren't they charging Gary? I thought they were. Hmm one sharp word from Yasmeen, with a call to the father of the leader of the gang, and the teenage thugs went skittering away. How much do you want to bet that's the last we see of them? They'll bully Roy but they won't bother his guard dog, Yasmeen. Anyway, as I was saying, I never did think Roy would get a prison sentence. There really were mitigating circumstances and Gary certainly wasn't urging them to press charges. Roy seems to feel he deserves a stiff punishment and felt bad that they only gave him community service. He'll be ok. He tries to make up with Mary who's not really ready to forgive but indicates she will be so that's ok.

Anna's still angry but allows that she has to go back to work because she's the only one bringing in a regular wage. It'll be pretty frosty at the cafe for the forseeable, then. Anna was certainly being a cow to Roy in the cafe wasn't she? Made it very clear that she was there under sufference. If i was Roy I'd be telling her to have a little more respect for her employer or pack it in but he'd never do that. She doesn't have to be friendly if that's how she feels about him, but she should at least be a bit more civil instead of spitting that she's just being spiteful.

Amy's still pretending she can see ghosts and it's not just Norris she's having a bit of fun with. Now it's Faye who told Katy who, as per usual, sticks her gob into somewhere that it doesn't belong. My god she's getting more and more unpleasant, isn't she? Ok, maybe Amy inferring she could see Faye's dead mother was not very funny but I loved Amy's and Tracy's sarcastic remarks to Katy.

Alya has decided to stay with Gary after all. Yasmeen didn't seem to blink though she could obviously overhear the conversation they had on the street. Yet Alya didn't seem to realize. If she didn't hear, it must have been that cone of silence that plagues the Street sometimes when you can overhear from yards away but never hear from 4 feet away. Maybe she heard or maybe she didn't, but she's supporting them because she can see she has no choice. it's a done deal. Kal's just sulking. But Granny is right, Alya's a grown woman, not a child. Kevin's advice was to just be there to pick up the pieces. So says the voice of experience. We'll see how long it lasts.

Alya and Izzy traded some sharp words in the factory. Seemed a bit strange the way it was written. Izzy didn't want to be Alya's mate and was sharp with her so Alya pulls rank, reminding Izzy she's her boss? Makes it sound like being friends was part of the job. I don't think it was meant to be like that but it's the way it seemed to come across.

Alya borrowed the basque for a wedding "fayre" but didn't tell anyone. That was a bit irresponsible. Even more because it now has a wine stain on it. Julie saved the day there with soda water and Sinead has to do some more repairs but in the end, it'll be ok. Anyway, Alya and Sinead seem to be ok and Alya apologised. Their discussion over the sewing seemed to show how little they really have in common, though. Too bad because Alya could use a mate.

Luke is still sniffing around Maria and they're still dating. Luke is going to cook for Maria, expecting to have Number 9 to themselves. Naturally Tyrone doesn't get away to Wolverhampton after all and is invited to the meal like a third wheel. Maria really seems to be hot and cold about Luke. Now Maria doesn't want him at the wedding. I reckon it's because she doesn't want to introduce him to her parents who would have expectations.

Chesney's a redhead and Katy's a brunette. Odd that Joseph is now as blonde as Sinead! And then there's Joseph, just as blonde with redheaded Gary and dark haired Tina as parents. Looks like Sean is still seeing Billy and the hens thought he was the stripper! He's a nice lad, isn't he? He handled the women with aplomb. Liz might have bailed Steve out last week, so that the staff could get paid, but the bills are still coming in from his spending spree. Michelle has met a nice looking fella, Hamish and Eva thinks she's crazy not to go out with him when he asks. Michelle is a bit gun shy after Steve but eva reckons she's wasting her life shutting herself away. Steve just can't deal with Michelle or anyone else that wants to help so she ended up calling Hamish and accepting the date. And when she went on the date she was in knots whether to kiss him if the opportunity arrises. Since when was Michelle shy about that sort of thing? Anyway she did look pretty hot whereas Hamish couldn't even be arsed to shave! I'd call that a fashion fail! Well, he seems nice enough, having said all that. But poor Steve overhears Kirk and Chesney talking and and then sees Hamish trying to kiss Michelle, which she does after Steve goes back in.

>My guess is that she managed to get to Barbados to Becky, at Becky's expense, likely.

I believe at one point David called Becky, who hadn't heard from her sister either.