Barbara Knox's 1973 album: On The Street Where I Live 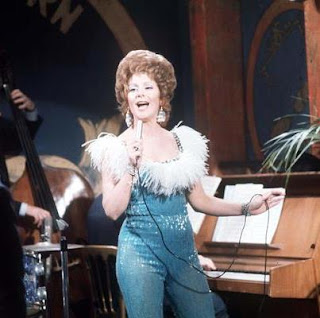 (This post was originally posted by Llifon on the Coronation Street Blog in October 2015.)


While looking at some vintage Corrie episodes on YouTube, I came across these 11 audio clips of Barbara Knox (or Mullaney as she was called back then) singing from her record album, a year or so after she returned to Corrie in 1972.

Back in 1964, Barbara Knox was playing Rita, who was portrayed as an exotic dancer but by 1972 in Corrie she was also a singer. Barbara Knox has often recalled that she was horrified when the Corrie producers asked her to sing on the show. In the soap, Rita's rehearsal went well and for many years, Rita was known as the Weatherfield Nightingale and she still gives us a song now and then.

In 1973, Barbara Knox was asked to record an album. It was called 'On the Street Where I Live'. I have to say that many of the songs are unknown to me, but it's great listening to them. Sadly, she was never allowed to promote the album, and so few were sold. So if you have got a copy at home, leave a comment below and tell us about it.

You can listen to all the songs here.

You're Getting to be a Habit with Me - First heard in the film 42nd Street (1932), starring Warren Baxter and Ruby Keeler. It was later recorded by the likes of Petula Clark, Bing Crosby, Doris Day and Frank Sinatra.

The Very Thought of You - A 1934 song that was a popular recording by Bing Crosby.

Embraceable You - A 1930 song that was recorded by the likes of Billie Holliday, Bing Crosby, Nat King Cole and Frank Sinatra. Knox performed this song on the Corrie on the QE2 spin-off in 1995.

I'll See You in my Dreams - A 1924 song that was recorded by Pat Boone, Doris Day, Ella Fitzgerald and Andy Williams.

I Can't Give You Anything But Love, Baby - A 1928 song that has been recorded by Louis Armstrong, Dean Martin, Doris Day and most recently Tony Bennett and Lady Gaga.

The Nearness of You - A 1940 song that was featured in Romance in the Dark. It was later recorded by Glenn Miller, Dinah Shore, Shirley Bassey and Nat King Cole amongst others.

Let's Do It, Let's Fall in Love - A 1928 song by Cole Porter for the musical Paris. It's been recorded by Eartha Kitt, Frank Sinatra and Ella Fitzgerald.

Paradise - A 1931 song that was recorded by Nat King Cole, Frank Sinatra and Bing Crosby.

The Party's Over - A 1956 song that was recorded by Nat King Cole, Lonnie Donegan, Lesley Gore, Shirley Bassey and Doris Day.

It would be nice to know if Barbara Knox chose these songs herself, as they are 'Rita' classics.