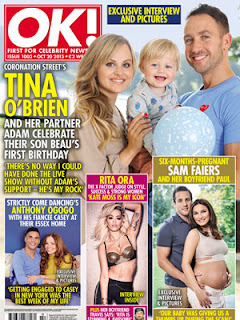 I'm loving having Sarah Platt back on the cobbles!  Actress Tina O'Brien is doing an amazing job and this week is featured on the front cover of OK! Magazine with her son Beau and partner Adam.

Tina tells the magazine about the Coronation Street live episode: "We were starting at 2pm and not finishing until 1am or 2am, so much so that I booked into a hotel near the studio for a couple of nights because it wasn’t feasible for me to come home so late, as Beau is up at 6am.

"It was such a great opportunity and it was only that extreme for a couple of weeks.There’s no way I could have done the live show without Adam’s support."