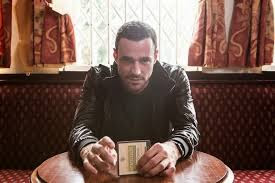 (This post was originally posted by Ruth Owen on the Coronation Street Blog in September 2015, reposted with permission.)


After a more complicated journey than usual, Emma, my fellow blogger, and I arrived at Media City, more than a little excited, it has to be said, at the prospect of interviewing several actors on the cobbles about the forthcoming Live Episode.
b
Corrie producer Stuart Blackburn addressed us all in his usual enthusiastic way, praising the actors and the writers. We were treated to an edited recording of the events leading up to the live episode, so we could see how certain storylines will play out on 23 September. (October 13 and 14th in Canada) It became clear that the Platts will take centre stage in the live episode due to their shenanigans with Callum.

All of the actors interviewed confessed to being nervous as the episode approached and on August 11, the day of the interviews, not one of the actors had received a script, so as yet, not one line had been learned.

The common thread amongst all the actors was fear of addressing their fellow actors by their real names, not their Corrie names. Viewers of East Enders will recall that that actually did happen in their live episode. I’m happy to report though, that there was no crowing about this accident, only understanding and sympathy from the Corrie actors. 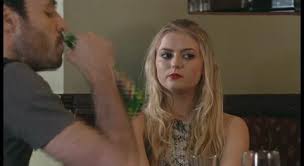 I interviewed Sean Ward who plays Callum and Lucy Fallon who plays Bethany Platt. As we all know, Bethany has, under great pressure from Gemma and Callum, given Callum an alibi. She has told the police that on the night that Jason Grimshaw was beaten to a pulp and hospitalised, unconscious, that she was actually with Callum and Gemma watching films, so therefore the assault on Jason had nothing to do with Callum. Of course, we know differently.

I asked Sean and Lucy how they felt about the live episode and though ‘petrified’ they both said they’re looking forward to it and are confident that when the time comes, they will be ‘on point’. The adrenaline rush will be like no other and will see them through. It will be both ‘a buzz and a challenge’ agreed the actors.

Though they have no script as yet, Sean thinks that he and Lucy are in the first scene of the live episode. Sean revealed that he learns his lines by writing them out, pretty much like you revise for an exam. It was amusing to think of bad boy Callum labouring over his lines and to imagine his neatly filed notebooks with his lines in, in his best handwriting.

Asked why Callum behaves as he does, Sean Ward said that, ‘Maybe he didn’t get enough hugs off his mum.’ He added that we will see a vulnerable side to Callum. Sean said he wanted to create a balance and that if he played Callum ‘just right’ then, like other soap villains, notably, Richard Hillman, he would go down in history.

Regarding him and Bethany, there never has, in Callum’s eyes, been a relationship. Bethany has a crush on him, and as he does with most women, he manipulates her and exploits the fact that she has a crush on him. Still on the women in his life, I asked him about his relationship with Gemma. He said that they had always been friends, that it was entirely platonic and that there is a codependency operating between them. Further down than him in the food chain, Gemma does his bidding, while simultaneously, there are people above Callum in the drugs food chain, which will become evident. There is tremendous pressure on Callum from those in the drug world more senior to him.

Still on the subject of women, Sean was amazed that women like a bad guy and said all women were crazy. Did women throw themselves at him? Sean managed that question well and said that he is now a one-woman man so he ignores ‘all that.’

Callum threatens the Platts that they are to do exactly what he says, or their lives will be in danger. Callum goes on the rampage and smashes up Audrey’s salon and the Platt’s house. And there will be more.

Sean has been involved in 12 hour days, working with the fight co-ordinator for over a month to get some good moves in the fights he has with Tony.  He claims too, that both he and the actor who plays Tony are enjoying the choreographed moves very much, putting together their fights. Sean even suggested that we might begin to feel a little sorry for Callum as Tony launches further savage attacks on Callum. Terence Maynard, who plays Tony, and Sean, have had to stagger home on those days. Nevertheless Sean has found these long working days thrilling and satisfactory. It is not usual for the character of Callum to be involved in fights as usually he orders his boys to do his dirty work. While his boys are at work Callum makes a point of being seen so that no one will accuse him and that he has witnesses. Clever Callum!

In real life, Sean said that he is often approached, sometimes jokingly, sometimes not, by people asking him, ‘Got any drugs mate?’ To which Sean replies, ‘No, it’s not real!’

Lucy Fallon was asked about people’s reactions to her character. She said that reactions were split. Young people thought she was ‘cool’ but older people were unimpressed by her and think that she is ‘rude and ungrateful’. She loves being at Coronation Street though and enjoys working with the Platts very much.

Lucy said that Bethany will grow up after the Callum rampage and begin to mature. She expressed a wish to have Craig, played by Colson Smith as her boyfriend, because ‘he is just so nice.’ Nobody can argue with that. 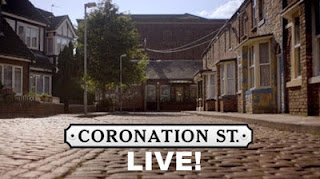