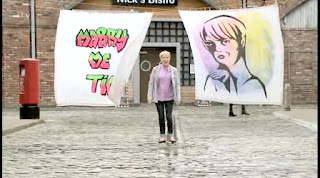 Avant Garde award: I loved Craig's art and Sally's last ditch attempt at a proposal in the middle of the street!

Gift Horse in the Mouth award: Not only did Callum's mother wonder what was in the sandwich but wanted to ascertain what sort of ham it was. What the heck was that all about? 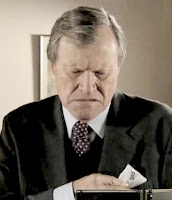 Fashion flair award: Roy's pocket square with the R on it. Awwww.

Waif award: Gemma might be a lot of things, but i didn't half feel for her when she said to Kylie that she didn't have anyone else.

Cucumber cool: David is very good at keeping his cool.

Miraculous metabolism award: Sally was a good way into the bottle of vodka and on a drunken crying jag. But when Rita started buying her drinks in the Rovers she seemed nearly sober.


Blast from the Past award: Rita reminded Sally of the time Danny Hargreaves jilted her (I love when they throw these things in!)

Not so silent partner award: Johnny's money, Johnny's business. Looks like Underworld has another new boss.

Fashion award: Much better than that other wedding dress she tried. 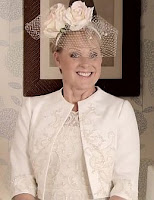 Road Test award: The new client went for a power walk on the cobbles to try out a new bra. Sounds right to me. If a bra can handle those puppies on a cobbled street and still be comfy, I'd buy it!

Sacking Offence award: How on earth does Sarah keep that job? She's forever leaving "on a break" and staying away hours.

Kind hearted award: Roy was going to ask Cathy to a concert but realized Ken needed the company more. It was the right thing to do, too.

Lines of the week:
David "Gail's no Princess"
Rita "Sally Webster does NOT wallow" Sally "Well she's wallowing now!"
Kylie to Sarah "Are you thick as well as annoying?"
Sophie "What if what you want doesn't want you"
Sally "I am going to marry that man by hook or by crook" Sophie "Yeah, well you're gonna need a big hook"
Tim to Sally "You think monogamy's the Scottish New Year" (Harsh)
Sally "Personally, I think there's a fine line between optimal hydration and bloating"
Beth "If you break a biscuit into tiny pieces, all the calories fall out" (It might not be true, but you never know! ;)
Eva "I look like Beyonce caught in a wind tunnel"
Rita "It's a long time since I went to a shotgun wedding"
Carla "Aidan, I'm not a silly cow with cheap extensions that you can win around with a bit of sweet talk"
Sally "I love you just the way you are" Tim "Without you, my life would be perfect...er... so sad!"
Johnny "Here's Johnnnnyyyy"
Beth "Team Carla. You know where you are with her, give or take the odd hangover"
Johnny "From now on, we do things my way" Carla "Great! As long as it's the same way as my way" Aidan "And mine"