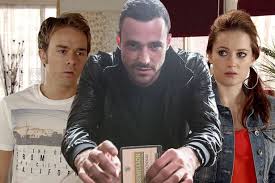 (This post was originally posted by Ruth Owen on the Coronation Street Blog in September 2015.)


Immediately noticeable on meeting Jack Shepherd and Paula Lane is the fun they have together. They came into the room, laughing, they laughed a lot during the interview and at the end of the interview, they went through the door laughing.

Also noticeable was that Jack Shepherd looked very much like David, which might be an odd thing to say until you see what I have to say about Paula - and that is that Paula Lane looked much nicer that Kylie does. Her hair wasn’t scraped back off her face and she was wearing hardly any makeup.

It is clear that the two of them are close and, in fact, Jack did point out that they saw a good deal more of each other that they did of their real life partners. Paula lives quite a distance away and is often not home until 9 pm and that is after an early start and also having just had a baby and coming back to work from maternity leave.  She summed it up in one word – tough.  She doesn’t have enough sleep and has to have significant support at home to do the job she does.

It is though, a job that Paula loves, as does Jack. On several occasions when I have interviewed people from Corrie they have referred to how much the cast and crew feel as if they are a family, where everyone looks out for and supports each other. It is a consistent thread and it makes me feel very content that that is the case.

Naturally, the majority of the questions centred around the Live Episode. Paula was very excited about it, Jack just a little less so, but there was no doubting their will to do their very best. Earlier, Stuart Blackburn had revealed the fact that the Platts would be the main focus of the episode. At the time of the interview though, August 11th they had not as yet received their scripts. Ten days is what they have to learn their lines. Both actors were keen to wrap up what they are currently working on and then free their minds to deal wholeheartedly with the live episode.

‘It’s an adrenaline rush like no other. It’s massive. It’s insane!’ said Paula, and the excitement and apprehension were almost tangible. Jack agreed but expressed himself in a more measured way, because, I would guess, his nature is such that he is calmer about life in general and also because he has been on the cobbles for so long. Paula has been Kylie since 2010, coming in as Becky’s sister and Jack has been on the cobbles since 1999. 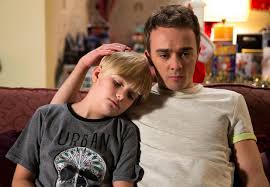 Asked if they thought that Callum was capable of murder, they both agreed and said too that they thought that David was also capable of murder. Kylie has always known just how cut throat and  dangerous Callum can be when riled. After all David has been no angel and as Stuart Blackburn said himself, it was most unusual to have David Platt as the good guy for once! Callum though wants power and he wants the last word. Callum demands £20,000, as viewers saw on the double episode of 11 September, and this is the start of our introduction to the food chain of the world of the drug dealer. Callum warns that he will ruin the Platt family and begins to carry out his threat. He ransacks Audrey’s salon, for starters.  Max’s not wanting to see his biological dad, infuriates Callum even more.

Viewers will have noticed Kylie saying all along that Callum would do anything to get what he wants and so far we have seen that determination and strength of will in his aim to secure Max. Whether he really wants Max seemed to be unclear.

Max is 10 and the little boy actor fully understands that it’s all pretend. Paula has known him for 5 years and is very protective of him and very fond of him too, as is David.

Both are feeling the pressure of the forthcoming live episode, though relished ‘the buzz and the challenge.’  They both feared saying someone’s real name instead of the character’s name and they expressed sympathy for the East Enders actor who said the actor’s real name instead of the actor’s name in the live episode. There was only sympathy for the actor and Jack pointed out that even though that mistake was made, it did create more publicity for the show. Maybe he was saying that there is no such thing as bad publicity.

Asked if there was any chance for David and Sarah to come together as they undergo the horrors that Callum unleashes, Jack replied that there was no chance of that. They have never and will never see eye to eye.  Somewhat contrarily, to his statement about his half sister, Jack pointed out that David had always craved his own family unit and part of his problems stemmed from the divorce of his mum and dad, Gail and Martin.

In the preview to the live episode we see that Max runs out into the road in front of the van that Nick is driving. There were no revelations as to the outcome of that scene.