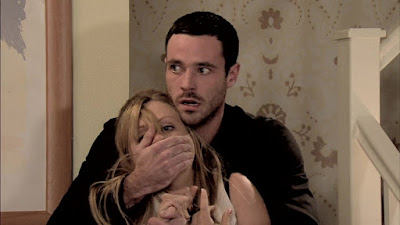 I was really looking forward to the live episode (airing last night in Canada) and it didn't let me down. I wrote down a few notes while watching and I give you the running commentary:

You can really feel the energy, can't you?

Yes, Sarah, he does scare you!

Cathy took Roy to Blackpool, she mentioned the Blackpool Tower... and everyone groans. 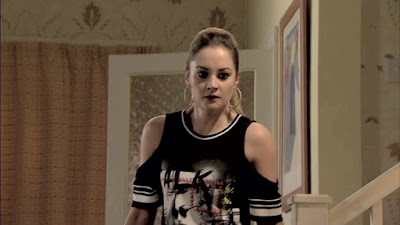 All that screaming and hollering, why can't the Nazir families hear them? Uh oh, it went quiet awfully suddenly. Holy crap, Kylie!

Now the first break. You know, I've been predicting Callum's death for months. I never expected it to be one of the main characters. But on the other hand, after all their history, it's probably poetic justice that Kylie was the one that killed Callum.

Aw, in spite of everything, Sarah still wants to call the ambulance and save him!

Tina O'Brien and Paula Lane are knocking it out of the park, i gotta say. 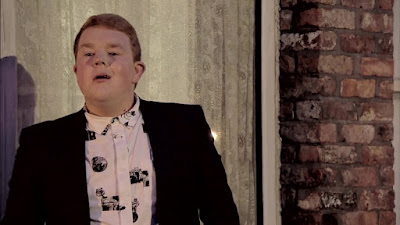 Poor Craig. Is he getting stood up? He looked great, didn't he?

Roy's driven to use exclamation marks. He really *is* wound up!

There's Eva, back where she belongs behind the bar!

I'm glad it was Carla left with Roy to put his world to rights. Poor Cathy. You have to feel for her. It wasn't her fault her timing was so off. And Carla's right, Roy is feeling more for Cathy and he's scared of it.

Oh typical. It's almost Keystone cops, isn't it? Key the car? How old are you? 12? Then, because it's so conveniently running, steal the car. You couldn't make this stuff up! Now what will they do with the body? Pull a John Stape and put him in the wheelie bin? 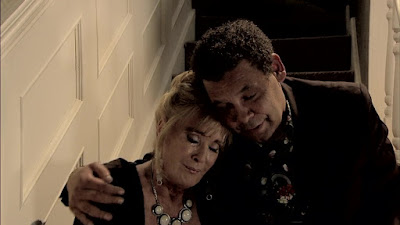 Liz and Lloyd were a good couple, weren't they?

Ah yes, the manhole cover that Tony conveniently found under the garage. Nobody is surprised Callum corked it and it was obvious that's where Callum was ending up.

Kylie in a panic, wants to run again?

Sarah's not fooling anyone, she's clearly not all right. 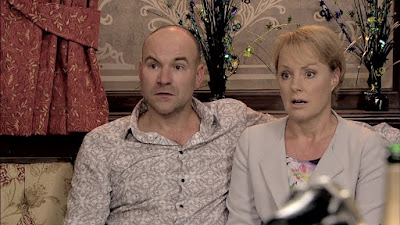 Anna does not "do" drunk very well. Anna drunk and Sally making digs has the inevitable result, Anna letting the Kevin Kiss Kat out of the bag. Uh oh! Had to happen. 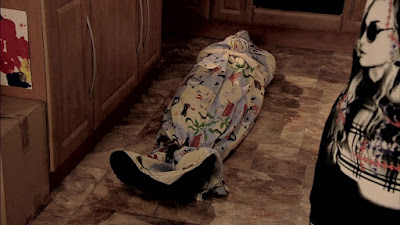 There's a body in the kitchen and the neighbours at the back door.


I thought Lloyd had been around longer than 10 years!

Yet another relationship going down the tubes over just a kiss. Knowing it was Sally that did the kissing made it worse. I can understand Tim feeling like that.

Yep, Craig got stood up.

Sinead sure is walking well, and on heels, for someone that was wobbling on crutches a month or so ago.

Down the rabbit hole for Callum. Are they sealing that over? Otherwise, it's going to start to smell pretty soon.


What? Who takes a taxi back from committing a crime? Seriously? Too bad they didn't wait a few more minutes to steal the car. Callum would have been in the back and he'd have gone up in smoke, too!

Cake is never a bad thing to try. Well, maybe if it's soaked in rum and you don't like rum.

Oh, please, don't put Tim and Anna together. I have a bad feeling about this if he and Sally don't get back together. 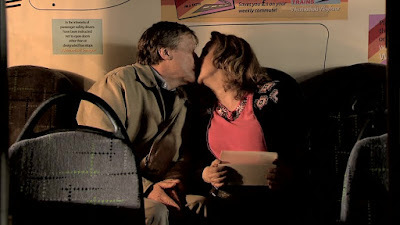 Awwww a little kiss for Roy and Cathy!


Awesome old car! And it's good bye to Lloyd (and Andrea)

Mistakes always come back to bite you in the backside. That goes for Sally and it probably goes for David and Kylie. David says he's going to get Callum out of the hole and miles away. Wanna bet?

Overall? Excellent. The bit with Todd and Tony stealing the car was contrived, obviously so that the manhole would be used. The neighbours that kept interrupting were also a bit "Keystone Cops" but you know... David, Kylie and Sarah really carried the episode and really nailed it. All three actors were fabulous.

The other main story involving Roy and Cathy was also really nice, Roy clearly at a turning point in his grief, as is Cathy. Both of them have found a way to understand that they can move on without forgetting their loved ones. It's going to be difficult for viewers to see Roy with someone else, but perhaps she's the right one. Hayley was the making of Roy, and now the tables have turned and Roy is the one that's giving Cathy the helping hand. It could work. I guess it will depend on how long Melanie Hill wants to stay with the show. David Neilson was in top form as usual, and was a joy to watch.

Sally's kiss with Kevin came back to bite her and Tim's heart is broken, not just because of what Sally did but because it was his new best mate, Kevin. That's the ultimate betrayal, isn't it? 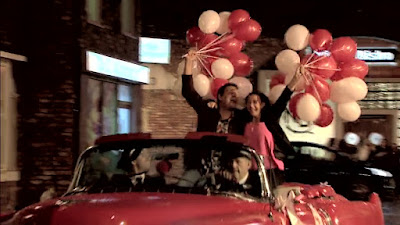 And finally, Lloyd and Andrea leave the street for a new life. Off they rode in an antique car with arms full of balloons. I will miss Lloyd a lot. I won't really miss Andrea. I didn't dislike her but I never really warmed up to her, either. They had a happy ending, though, and that's enough for me.

All in all, well done to the cast and crew!!!

There's a longer, more detailed blog post with more thoughts over here on State of the Street.

Email ThisBlogThis!Share to TwitterShare to FacebookShare to Pinterest
Labels: corrielive