Cheering for a Lloyd storyline 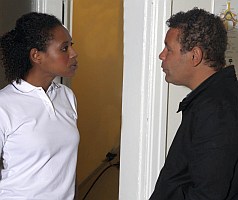 I, for one, an really looking forward to the new storyline featuring Lloyd discovering he's got a grown daughter. He's one of my favourite characters and he doesn't get a lot of storylines of his own. While the whole Cheryl thing was ill-fitted, I was still pleased that we saw more of Lloyd than his usual support role.

Jenna, his newly-discovered daughter, has rejected him but you know this will follow Soap Plot 231 and they will make up and get to know each other. So far, I like both actors who portray Jenna and Mandy.

More thoughts about Lloyd over here.