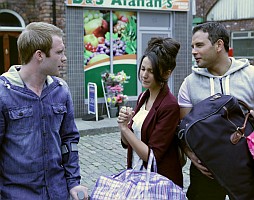 Tommy's a bit narked but he's accepting the surrogacy and Tina's smug but she did keep her temper quite well when giving Kirsty and Ty the money. Kirsty was a real bitch about 20 measly quid. Oh i can't wait to see her face when Tina hands over the whole amount. Tommy's snivveling again over flats and Owen isn't going to hand over cash before the pregnancy has taken. Fair enough, isn't it? Maybe he'll have to build a new shed out back for them to move into. Well no, Anna proposed the situation that i figured she would. Owen moves in with her and T&T can rent Owen's for no charge!!

Tina and Tommy are moving into Owen's and Kirsty's narked because she didn't know anything about it, and where did they get the money? Well they're not going to say they're living rent free are they? Next up, the fertility clinic. No chewing gum! It's a big step, heavy on the legal side and there's the medical issues to be considered. Tina admitted to the councillor that Tommy has got used to the idea. She did seem a bit intimidated by all the questions and prospects. I'm surprised she didn't mention, at least on screen, that she'd been pregnant once already and decided she was too young for a baby that time. I wonder if Tommy knows? 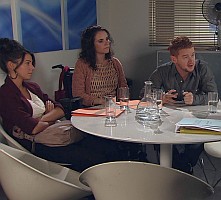 It really irritates me how Gary is so blind to any other opinion, any other possible problem, Nobody else's opinion counts and he won't let anyone even try to speak in case they put Tina off. He needs to pick up every single little detail and won't take any possibility that it won't happen. Even Owen seems a bit over-focussed, quizzing Tommy on his feelings and quizzing Tina about Tommy as well. Terrified she'll back out. Tina is terrified that Tommy could do something as stupid as Joe did to get out of debt and that was another reason she decided to do this for the cash. So what does he do? Give them 5,000 just to make sure they stay on board. It makes Tommy want to back out, it scares him, the idea of the committment they're making. And I am so glad i got to see Kirsty's face when 3000 quid was flashed at her. 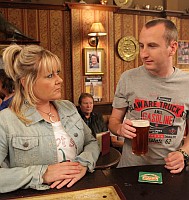 Beth lied about her date and Kirk agreed to back her up. She exaggerated enormously and Kirk showed up with a black eye. You notice he didn't have any trouble at all executing a deep wink with the bruised eye though. I think Beth looked really nice, even nicer the day after the date, with just a tshirt and a bit of makeup on. But it isn't very long that the gossip in the factory is all about Beth and Kirky. Loved Beth getting all the info from both of Kirk's former girlfriends. Fiz helped Beth meet up "accidentally" with Kirk in the pub and voila, snog city! Julie's more interested in texting Fiz the gossip than listening to Brian blather on. No surprise there.

Lloyd feels very let down about Mandy giving him the brush off. Tyrone and Kirsty showing off their little family didn't help matters. He just couldn't help himself and went back to Mandy's but met her daughter Jenna instead, a daughter Mandy didn't tell him about. Curiouser and curiouser.  Lloyd's trying to figure it all out with Eileen as a sounding board and Eileen started to voice Lloyd's suspicions until Mandy walked in and coming all that way to tell Lloyd to back off is certainly suspicious. He's come to the most logical conclusion. Eileen threw out a few alternative motives but Lloyd thinks the math seems to add up, that along with Mandy's reaction. He couldn't stay away from Jenna and had to go get another good look at her. He figured out her birthday which worked out to what he thought it would be from the dates of the affair. She's a really  nice girl, it seems like but her mother is very defensive even admitting they had a fling.

Ah it's all coming out. Jenna was not happy to find out they cheated on her father and she snapped quickly to the real reason her mother is upset and the truth is out there. He reckons Jenna will come around and she does seem a sensible girl. I can't blame Lloyd for being upset, nor Jenna who overheard that her father knew all about it all. It's quite a shock to the system for her. It's nice that Eileen is such a support for Lloyd. And Jenna followed Lloyd to the pub to also tell him to stay away from her (Like mother, like daughter). So Jenna told Lloyd to pound sand and is highly upset about finding out about her bio dad and now Mandy comes round thinking Lloyd might just know where she is? Really? Can you say "contrived"? What did she think Lloyd was going to do knowing Jenna was not at home when her mother went looking?

Lloyd's in a knot about it all and Eileen is admirable as the voice of reason (ahem). He tracked Jenna down. Does anyone else think he's showing Stalker qualities? She sure does at this point.  This storyline is unfolding into something very good so far with excellent actors on all accounts. Let's hope they don't mess it up. 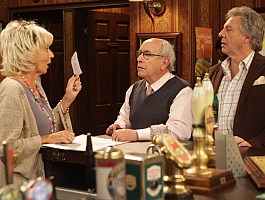 Gloria now has her head in the clouds about that pub of the year contest. As if a little back street pub would even have a chance. If she thinks the Rovers could satisfy the qualifications, she better get hotpot back on the menu! Mind you i don't think Stella allowed the removal of the longest tradition on the pub menu because Gloria bragged about the dish and she's gone all Annie Walker on us about the pub, too, pretending to be the landlady. Stella has already sussed her mother's lies about her being the landlady. I don't know how she thought she'd get away with it. Gloria's going to have to come up with something that will impress the judges in the contest and i shudder to think! Tell you what, though, I think Gloria would make a far better landlady than Stella. More animated at least.

There's a comments box. What you want to bet Gloria will submit fake comments? You'd win that bet because that's exactly what she did. She's certainly pushing the comment cards on the punters and offering to fill them in for them. She should have offered to do it for Mary and Norris because their ratings and comments are not going to be as complimentary as Gloria might hope. Gloria is intent on prying into and  stacking the comments from the box. She didn't like what she heard about herself either. She *is* vulgar and loud,  and her solution? Barring Norris and Mary. Not going to win you friends and influence the competition judges.

Of course Norris would hold Gloria's antics against Stella. Mean and nasty little oik. I know she shouldn't have behaved as she did but for me, not being Norris' biggest fan...I wouldn't have been disappointed to be drinking in a Norris-free pub.

Owen's now under Anna's roof and feet under her table. They do make a pretty good couple really in spite of his attitude. She brings out the best in him I think. Wait...Gloria's been in the pub a few weeks now and Mary doesn't know who she is? I love that Eileen is back in the cab office to be a support for Steve and especially Lloyd right now. Brian and Julie are going to be moving into the flat and Julie is awash with design magazines. Tracy is still sticking her tongue down Ryan's throat in public. Michelle even gave Ryan some money because he was moaning about being broke and he spent it on a gift for Tracy. Ouch. I see Tracy's campaign is working out as she hoped. 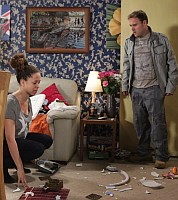 Kirsty is finding out how hard it is to handle a newborn. And the more tense she gets, the more upset the baby's going to get. But Kirsty is going to resent it if Tyrone can manage the baby and she can't. She also wasn't too pleased with Tyrone sending Smug Sally and Fiz around to help. Tyrone really is thick isn't he? He knows how she feels about Fiz. Sally sticks her nose right in there and barges in like she does. She even picked up the baby even though Kirsty didn't want her to. I don't blame her for getting annoyed and she felt embarassed that Tyrone asked his friends to help her. That makes her feel like he thinks she can't do it, but she didn't half overrreact, throwing stuff around the room. Tyrone freaked out, knowing what could have happened. 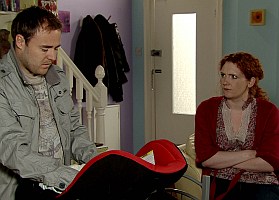 Maybe taking the baby to the doctor was a bit of an overreaction, true, as the baby was perfectly fine and not crying or in pain. Poor Tyrone and he told Fiz all about it. Lad needs someone to talk to. Fiz talked a lot of sense to him, good advice to get him to talk to her councillor but, was anyone surprised to hear that Kirsty's been ducking out of her sessions? So she promises yet again. Promises made of thin air. I am rivetted by this storyline, I really am.

Brian isn't at all sorry that Meredith has popped her clogs. I hope her granddaughter isn't going to start messing with Faye again. Though actually, i do think Ken would be good on the board of Governors under normal circumstances. But the vice chair, Mrs. Papadopolous? Turns out she's Wendy Crozier as was!!! Talk about a blast from the past. Ken looked like a deer caught in the headlights when he saw her, but then that's his normal expression,  and Brian was *very* intrigued. He's worse of a gossip than half the factory girls altogether!

Brian really bigged up Ken. I could have gagged and after bragging how good a speaker he is, Ken couldn't get started! He must have done ok, though because he won the vote for the Chair.

*snort* Gloria thought Mary was Norris' daughter. She wrote a fake card calling herself "Golden Glo". All i can think of when i hear that is the cheap, nasty cider they used to sell here called Golden Glow. I totally agree with Michelle wanting Ryan to contribute financially. That scruffy half grey beard isn't doing Kevin any favours.