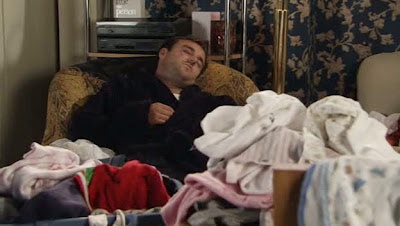 It's harder than it looks award: Tyrone is exhausted after a few hours minding the baby, spark out amid the piled up laundry!

Guilty as Charged M'Lud award: Could Marcus have looked any guiltier when Jason interrupted the kiss?

Pants on Fire: Ken lies like a rug but he got busted this time.

Pack Rat award: Wendy kept the cufflinks she had made for Ken in 1990.

Tie Breaker award: Was anyone surprised when Ken chose books over computers for the school?

All ModCons award: There's a computer in the taxi office!

Competitive award: The Bistro is offering breakfast even though the Cafe only did the one night (so far)

Stupidity award: Ken phoned Wendy on the land line. A number that will show up on the phone bill. Yet he does have a mobile.

Green eyed monster award: Michelle is jealous that Ryan gets on better with Sally but Sally's trying to do her bit to talk Ryan round, much to her credit.

Lines of the week: Eileen to Jason "Do you think Maria's The One?" (she is this week at least)
Paul "And I thought parties are supposed to be fun" (they are, but putting one together is hard work!)
Mary "There's no room for sentiment in business"
Julie "I love citrus" Paul "You can always suck a lemon"
Kirk to Jason "Welcome to the family. Let's hope you last longer than the other brothers-in-law i've had" (doh, would that be a phrase of doom, then?)
Wendy "I do find it hard to let go" (uhoh, another phrase of doom!)
Deidre to Ken "I want to know where you've been...and who with" (echoing the words she said to him 20 years ago! Nice touch!)
Gail about Mary "It's the quiet ones that are always the worst" (in whose world is Mary the quiet one?)
Mary "The only tough cookies in that restaurant are on the menu" and "It *is* a war. And come next week it will be the Cold War" (re: Russian night)
Brian "I'm being embroiled against me will"
Rita "I haven't overtaken anything in over 50 years"
Ken "There's nothing going on!" Tracy "right, because if I hear otherwise, you're going to wish you'd sailed away on that other trollop's barge!"

And the line of the week came from Emily "Will that man NEVER learn?!"