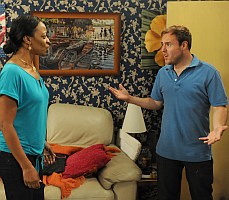 I can't blame Tyrone for wanting to keep Ruby away from Kirsty. She's so volatile and though she loves that baby, you know she does, Tyrone just doesn't know what she could do when the red mist lowers. Kevin needs a pop upside the head too, ignoramus indeed. He's got a short memory. When he had all that time off with Jack, Ty didn't have Tommy to help him and did it all on his own.

Now Kirsty's mother has turned up and she's left the hard case Ed. I found myself riveted to the screen when she was telling Kirsty how she came to leave him and watching Kirsty's reactions. Wow, some really good scenes! It really was done well. A Damon Rochfort script never disappoints. Kirsty's mom is in place so Ty figures he can go back to work, which concerns Fiz. Mom's full of regrets and Kirsty clearly has suffered the worst. Maybe her explanations of why she stayed can make Kirsty realize what Tyrone's going through. She still needs to go to councilling. If her mother ever finds out what's going on, maybe she'll march her daughter straight there to prevent a catastophe.

Bad decision letting Mom stay at Number 9, though because Dad turns up and that will be worse. I do wonder why he waited a few days after she left to come round, though. You're just asking for trouble in spite of Tyrone needing to have someone there to keep an eye on Kirsty. He says he can protect her and he can try but I don't think he's a fighter.

Kirsty's dad is the real stalker, lurking around corners and stealing babies from back yards to make his point. It's weird seeing him, though, because he used to be one of the previous Peter Barlows back in the early 80s. Did he just want to see the baby when he showed up the second time? Maybe, but he saw his wife too, and it turned into a big control issue as usual. He snatched the baby just because he could, just to scare them. To prove he's in charge. He said it wasn't fun finding his nearest and dearest snatched from him. But the difference is that his wife walked away of her own free will. And confronted with the force that his her husband, Alison caved. Even when he protested that he's no bully, he lunged for Kisty the minute she was trying to stall him from taking her mother home. Alison could only leave in the first place when he was out of the house and she didn't have to see or talk to him. Unfortunately this happens all too often.

And Kirsty turned it all around on Tyrone and blamed him and he's bruised again. She's got to see that she needs help, and soon. Kirsty laid a real bombshell on Tyrone. I wonder if she did it just in case or if she's lying about it? I wouldn't put it past her to do it as insurance against just this sort of thing. She knew he was at the end of his rope before he took the baby for a walk so she made a pre-emptive strike. Kirsty took Ty's legal rights away. She might be upset he wants to leave her but she's also a calculating b*tch as well. She didn't know for sure but did it for insurance. So now, He isn't on the birth certificate so he has no legal rights. But Fiz reckons he should still talk to a solicitor, and yes, he should. Kevin managed to get a DNA test on Jack without Molly knowing, surely Tyrone can do the same thing. It's lovely that Fiz is so kind to Tyrone and so supportive. She's a lot gentler about it than Tina is. Tina just shouts the odds but Fiz quietly dishes out sympathy and concern.

Kirsty moaned about feeling like she's got no life, staying at home with the baby so Tyrone fixed that. He sent her back to work and he decided to stay home. That's going to really put Kevin on the spot, though. He can't rehire Tommy either because Tommy's still in plaster. Tyrone has made his decision. Kevin doesn't like it but he doesn't understand. Fiz understands but doesn't like it either and she's worried sick. 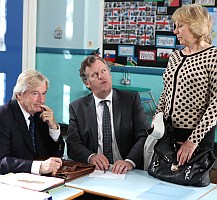 Brian is going to be the instigator for a lot of problems between Ken and Deirdre now he's managed to keep Ken on the same board as Wendy. Deirdre is noticing Ken dressing up and supervising his ties but she doesn't know it's to see Wendy. He's already lying to her! It seems like it's going to be all business between the two of them but Deirdre won't believe it when she finds out. And she will, you know. And then she'll assume the worst. Will she push Ken into an affair? Wouldn't it be nice for a change if that didn't happen? He and Wendy got caught up and resolved the past.

Ryan ...Tracy... boring. Michelle wants rent from Ryan. Proper thing. Ryan wants his girlfriend and his mom to be friends. Never gonna happen. Fight on the cobbles with the women in huge curlers, both of whom normally have dead straight hair. It was only a bit of pushing and shouting, nothing like rolling around in dressing gowns. Nobody even ended up tearing a curler out of the other one's head! And the only good part of it was Kylie watching it with delight. The gloves are off and the blinders are down. Tracy is banned from the flat.

I'm so sick of Ryan and Tracy. I really am. If Ryan's supposed to be falling for her, he's not convincing me. If he could speak more clearly and act the part better, I might buy into it. Tracy is doing a very good job of pushing Ryan and Michelle apart and is really REALLY enjoying the aggro. That's what it's all about with her. Change the record. Tracy has succeeded in getting Ryan thrown out of the flat but he was a bit shocked that she wouldn't let him move straight in, using Ken as an excuse. He used a sob story and managed to find a crash pad with Sally and Sophie. And wow, that cocaine addiction, one of the hardest to kick, seems to have mysteriously disappeared. 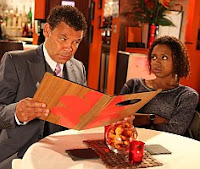 Lloyd managed to talk Jenna into having a meal with him after making an appointment with her at the clinic using a false name. Still stalking. I can understand him wanting to know his daughter and how else is he going to get her to talk to him but maybe he should be waiting for her to come to him. She probably would given time but since it's a soap, we need to move things along i guess. I love that Eileen has been such a good support to him.  Lloyd entertained Jenna at the Bistro, making it seem like he's far more sophisticated than he is but she wasn't impressed. I thought she clocked him straight away but she was just skeptical. Turns out they're both hotpot and beer types of people. That cracked the ice between then so it looks like it's going to be ok.  They started to get to know each other. Lloyd and Jenna are getting on like a house on fire but she's still hateful towards her mother for not telling her about Lloyd all these years. You can understand why she is so upset.


So the surrogacy medical treatment begins. Apparently all these extra hormones can bring on PMS like a son of a bitch. As if Tina needs any more reason to be stroppy and Izzy is normally pretty prickly on her own too. Gary and Tommy might want to buy body armour. Maybe Tyrone can lend them some! Owen keeps sticking his face in the middle of it, is he scared he's not going to get his money's worth? Izzy's the only one that really knows how to handle him.


Mary's won two flights across the pond and Norris is practically peeing himself to get invited along with her. I don't know why though, after all, the last holiday they took together turned into a nightmare on the moors. Lately, though, he seems to be fonder of her and he tried everything from chocolate to sycophantish flattery. She enjoyed stringing him along, didn't she? Mary even said she would have taken Norris if she had been the one to go but she gave the tickets to Roy and Hayley instead! She does have some stuff to make up for. 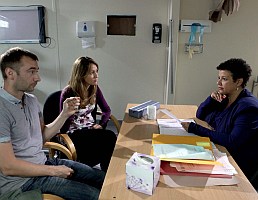 Maria is terrified she's got breast cancer and Marcus is her rock. She told him what she couldn't tell Jason. I know they just did this with Sally but that's exactly why I think it will probably end up being a scare.

David feels bad that Nick bought Max's football boots. If Gail had bought them, probably David wouldn't have felt so bad but he didn't hold it against Nick for too long, once Nick realized and apologized. But it's nice that an uncle can buy things for a nephew. I wonder if Kylie is going to start taking advantage though. I really hope they don't throw Kylie and Nick together. Kylie really does love David but I can see him getting jealous.

Michelle's outfits are starting to resemble Liz MacDonald's. Eileen's birthday soon. It's been quite a year hasn't it? She met Paul on her birthday last year when she got her head caught in the railings.

I don't know anything about surrogacy, I'll admit it. But I don't get why both Tina and Izzy have to take hormones...maybe I can see why Tina does, but Izzy isn't going to carry the baby, only provide the egg. Um, aren't those eggs just sitting there waiting? What do the hormones do?
fondue123

I think the hormones that Izzy will take will ensure she produces more eggs during ovulation. Tina's body has to be prepped to make sure the pregnancy "takes" and stays. I assume she has to ovulate too and perhaps their cycles need to be in sync

When they were having the meeting with the surrogacy counselor she mentioned that Izzy and Tina would have to take hormones to synchronize their menstrual cycles. In order for the fertilized egg to be implanted at the right time, both women have to be at the same stage of ovulation.
That led to that silly conversation in the cafe about sticking the guys with needles in some sort of solidarity.