Grizzly Bare: Cliff is a "grizzled Rock Hudson"? Well she got the grizzled part right at least. (O.M.G. Can Cliff hang around for awhile? He's bloody brilliant!) 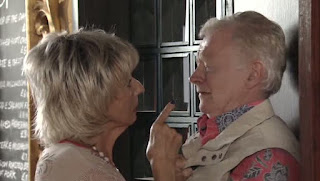 Busybody award: Gloria is sailing awfully close to the line poking her nose in everywhere. She'll fit right in!

Pants on Fire award: Gloria was telling a load of flannel about her flight from Spain!  aka Hoist with her own Petard award.

Mr. Moneybags award: Owen's giving Tina 15K and it'll cost a minimum of 7K for the fertility treatment *each* time they have to do it.

Unreasonable award: Is Tommy being unreasonable? Is Tina for not taking Rita's offer? Is Gary for wearing blinders when it comes to fatherhood?

White Knight award: Kirk rode in on a white van and took one on the jaw for Beth.

Dirty Dog award: Yet another man cheated with the wife of his best friend. To quote Eileen "Oh Lloyd!"

Music ambience award: Fiz and Julie chatting to Beth about her new fella, the one she's lying about, to Heart of Glass.
Be careful what you wish for award: Lloyd is feeling down, no direction to his life. Something tells me that's all about to change. It's the Soap Law! Hidden Agenda award: Is Dev trying to break up Karl and Sunita? Is he trying to get her back? Or is he just trying to give her back some of the torment she gave him. 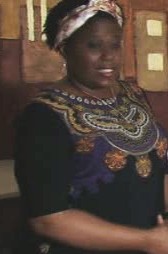 Jigsaw award: Tommy and Tina break up and get back together more than a jigsaw puzzle.

Lines of the week: Kirk "Half a lager, please" Tina "Are you on detox?" Kirk "No, I'm skint"
Tina to Owen (joking) "Maybe I should have the baby for them" (oh wait....)
Gail "I bottom every morning!" Gloria "You haven't seen a Spanish bottom"
Beth to Kirk "Zip it, Zombie!" Gail "And Gloria left Spain under a cloud?" Cliff "A very large one what with those chemicals? It was like Chernobyl!" (snort)
Stella "You are not to interfere with my life" Gloria "Even if you're making a fool of yourself?"
Lloyd "Some things are best left in the past" (guaranteeing he'll run into her again)

Owen "I can't tell my daughters how to run their lives. Nor would i want to" (I now have to clean my monitor)

Dennis "I think she's stirred the green-eyed monster in you" Rita "As long as she hasn't stirred anything in you!" Dennis "I wouldn't even let her stir me tea!" (Good answer!)

Rita "I don't give my life savings to every Tom, Dick and Harry" (Um, you pretty much do!)

Kirk "I wish i could say deep things" (he does sometimes, without even realizing it)

I think Tina should get some sort of award for that terrible fake tan she's got!

Gosh i know, she's getting more and more orange!