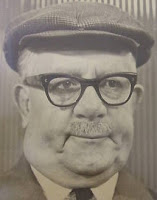 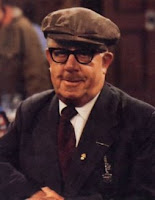 First appeared: 9th December 1960
Last appeared: 25th January 1984
Jack Howarth played the role of grumpy pensioner Albert Tatlock between 1960 and 1984.
Born in Rochdale in Lancashire in 1896, Howarth attended the same school as wartime singer Gracie Fields. Like many of the Street’s early cast members, Jack Howarth began his acting career in the theatre. He later ran his own cinema during the 1910s and was also a member of the Lancashire Fusiliers during the Great War. He also ran his own theatre in Colwyn Bay, North Wales and that’s where he met William Roache (Ken Barlow) for the first time. None of them would think they’d work alongside each other for nearly 25 years on Coronation Street. He made his television debut in 1949 in The Cure for Love. During the 1950s in appeared in films The Man in the White Suit (1951) and Hobson’s Choice (1954) and TV shows The Secret Garden (1952) and BBC Sunday Night Theatre (1950-1953). In 1960, he appeared in Emergency Ward Ten, one of Britain’s first soap operas.
At 64, he was chosen to play the role of 65 year old curmudgeonly WWI veteran Albert Tatlock in new drama serial Coronation Street. Appearing in the first episode, Albert is fondly remembered for his flat cap and glasses and boring his residents with his wartime stories, Albert was Britain’s Mr Grump. A widower throughout his tenure, romance did enter Albert’s life occasionally. Clara Midgeley proposed to him in 1965 but he declined. He became engaged to Alice Pickens in 1969 but they called off the wedding when the vicar’s car broke down and they saw it as a bad omen. He proposed the next time to old friend Minnie Caldwell in 1973 in a bid to bid to solve their financial worries but Minnie called it off when she grew tired of his habits. Albert’s life revolved around his allotment and he enjoyed reminiscing with Minnie and Ena Sharples in the Rovers snug while supping his rum. He was elated when his niece Valerie married Ken Barlow in 1962 and when their twins Peter and Susan were born in 1965. He was devastated when Valerie was electrocuted in 1971 and the twins were sent up to Scotland to be brought up by her parents. Albert maintained a close relationship with Ken who moved in with him between 1972 and 1973 and from 1976 onwards. Albert disapproved of Ken’s marriage to second wife Janet Reid but warmed towards his third wife Deirdre Langton and encouraged them to live at his house after they married.
By the early 1980s, Jack Howarth’s health began to deteriorate. In 1984, he took time off from the serial and was expected to return but sadly passed away in March that year of a liver complaint while holidaying in Llandudno, North Wales. He was 88. He’d been awarded an MBE the previous year for his charity work and his association with the disabled. Albert Tatlock was killed off in May while visiting his daughter Beattie, around four months after his final appearance. At the time, Jack Howarth was one of two members of the original cast still in the show – William Roache was the other. Over 23 years, he appeared in 1307 episodes. Albert’s presence still remains at No. 1 with his photo on the mantelpiece and Ken often recalls Albert’s fatherly advice over his own father Frank.
Jack had married Betty Murgatroyd in 1929 and had two children: John (b. 1930) and Anne (b. 1939).
Did you ever see or meet Jack Howarth? Do you have any pieces of trivia about him?  Did you know he once featured on a Damned single?
Research from Corriepedia, Wikipedia and IMDB.
Follow the Bluenose CorrieBlog on Twitter and Facebook
Posted by Tvor at 11:59