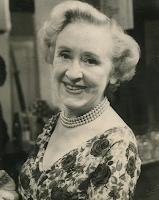 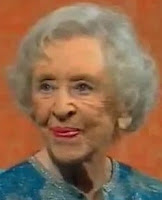 First appeared: 9th December 1960
Last appeared: 12th October 1983
Doris Speed played the role of snobbish Rovers landlady Annie Walker between 1960 and 1983.
Born in Manchester in 1899, she debuted on stage at the age of three. Both her parents were involved in the variety world which they also steeped Speed in. For most of her acting life she was involved in the theatre and even left the profession for a job as a clerk. She returned to acting late in life and made her TV debut in Armchair Theatre in 1957.
In 1960, she was given the role of 51 year old megalomaniac pub landlady Annie Walker in new drama serial Coronation Street – a role created specifically by Tony Warren with Speed in mind, remembering her days on the BBC’s Children’s Hour. Debuting in the very first episode, Annie Walker would remain a lynchpin on the cobbles for over twenty years, looking down her nose at her customers with her scathing remarks. Yet, she was a much loved and respected member of the community. And Doris Speed was also of a similar personality to Annie – cast members had respect for her and many of the younger cast were terrified of her and her stern looks. For nearly 23 years, Annie’s storylines included her marriage to Jack and his death in 1970; taking in Lucille Hewitt as a ward in 1964; running for council in 1965 but losing to Len Fairclough; becoming Alf Roberts’ mayoress in 1973; being confronted by burglars and the experience led to her falling down the stairs; an on-going rivalry with Nellie Harvey; celebrating 40 years behind the Rovers bar; being romanced by Gerald Price and Arthur Harvey; and storylines involving the Rovers and her staff Betty Turpin, Bet Lynch and Fred Gee.
By the early 1980s, Doris Speed was one of the few remaining members of the original cast still in the programme. In 1983, she was admitted to hospital and shortly afterwards it was revealed in the press that Speed was 15 years older than what she had always claimed – not 69 but 84. But I can honestly say that she looked smashing for an 84 year old. Soon after her house was burgled and the experience led her to have a nervous breakdown and she left the programme. But as Speed refused to return to film an exit storyline, Annie was written out as having decided to retire and stay with daughter Joan in Derby and passing on the license to son Billy who returned to the street and announced that his mother wouldn’t be returning. Annie’s presence continued in the Rovers with a photo of her on the mantelpiece, replacing that of Jack’s. Annie wasn’t officially killed off but since Speed’s death in 1994, every reference towards Annie has been worded as if she has died. For nearly 23 years, Doris Speed appeared in a total of 1737 episodes and during the 1960s was the member of cast who appeared most, and during the 1970s was second only to Len Fairclough with the most appearances. In 2012, she was ‘used’ in the exit storyline for Betty Williams (Betty Driver who played Betty had died) where it was revealed that she had given the Rovers to Betty in her will but Betty never accepted. This was an error as Annie never owned the Rovers but ran the tenancy.
Speed moved from her home to a nursing home in Bury near Manchester where she spent the rest of her days. She appeared on a tribute programme to co-star Margot Bryant (Minnie Caldwell) in 1988 and was a special guest on Happy Birthday Coronation Street! in 1990, which was a show celebrating Corrie’s pearl anniversary. Doris made her final TV appearance as a special guest on Classic Coronation Street in 1993, a show celebrating the best of Corrie. At 94, she was hard of hearing and was accompanied by Kenneth Farrington (who used to play her on-screen son Billy). She died the following year in Bury aged 95.

Doris was unmarried and lived with her mother Ada until the latter’s death in 1973, aged 97. Unlike the Tory Annie Walker, Doris was a staunch Labour supporter. She was awarded an MBE in 1977 for her role as Annie.
Did you ever see or meet Doris Speed? Do you have any pieces of trivia about her?
Research from Wikipedia, Corriepedia, Corrie Net, IMDB and "40 years of Coronation Street" by Daran Little.
Follow the Bluenose CorrieBlog on Twitter and Facebook
Posted by Tvor at 12:18