Specsavers: Were those a pair of Deirdre's old specs?

Educational Fail: Eva thought the Plantagenets was a band.

She's Baaaaack! Emily has the stomach for a fight. She's been fighting her whole life! Go, Emily, Go!!!

Action Man award: Petitions just aren't cutting it. Roy is going to take action and save the library!

Mind Your Own Business award: Norris, get out of Rita's affairs.

We're Not Gonna Take it award: Leanne is fighting back against Nick's vindictiveness. 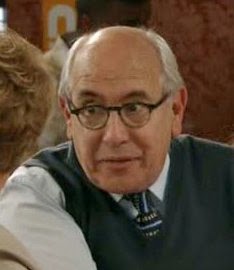 Continuity fail? Anna and Owen left the house together, yet she came down the road putting her coat on and he was sat on the bench. What did he do, zoom out ahead of her just to sit down 20 feet away? She thought he'd done a runner? What?

Slap Line forms to the Left: Doesn't Norris have a face that just invites being slapped? (In real life, slapping is not on. And to be fair, slapping Norris would only give him more reason to be self righteous)

Secrets and Lies award. Faye has a secret. Craig knows her online reputation is shot. Is it true or is it made up?

Cheap at half the price award: Gail only wanted a cornetto in payment for helping to clean up the van, a Herculean task if ever there was one!

Lines of the week:
Deidre about Ken "Your father's never lived it up in his life"
Tracy "Nana Blanche listened in to more private conversations than MI6"
Emily about Ramadan "Is it just food and drink you have to give up?" Yasmeen "Also sexual relations. But quite frankly, I'd rather have the bread pudding" (her mid morning snack)
Audrey re government cuts "They'd cut your feet off if you stood still too long"
Nick "Fair's got nothing to do with this"
Kal about Leanne's declaration of love "It's not quite how I imagined it" (nothing in this relationship is!)
Steve to Neil "You're like a flippin' boomerang"
Steve "It's like having the choice between a Chinese burn and a poke in the eye!"
Nick "You want a friend? Get a dog"
Dennis to Norris "Can I get you anything?" Rita "He's fine. He still has some humble pie to finish off"
Michael about the van "It doesn't need a mechanic, it needs a priest!"
Norris "My compliments to the microwave"