My disappointment in Dennis

(This post was originally posted by Llifon on the Coronation Street Blog in July 2014.)

Well, Dennis Tanner has gone! Will he be back? Who knows?

I have to say that since Dennis was re-introduced into Corrie over three years ago, I have been very disappointed at the way his character has been dealt with. And this is no fault of Philip Lowrie. It's in the hands of the powers that be. Here are some of my thoughts on the weaknesses of the charatcer.

When I heard the news that Dennis Tanner was being re-introduced, I was a little apprehensive. Yes, I was thrilled they were thinking of bringing him back, but yet I questioned why? There were plenty of other characters to re-introduce, why Dennis Tanner? He hadn't appeared since 1968 and only two characters, three at a push would remember him.

Then we got more info on his comeback. He would return as a tramp which was an interesting angle. You would expect that maybe Emily would find him prowling around the charity shop. But oh no, it was Rita who found him while volunteering in a homeless shelter. The producers made a mountain out of a molehill, quite frankly, of their friendship. Yes, Rita was introduced as Dennis' friend in 1964, but that was about it. For me, it would have been better for Emily or Ken to come across him and then bring him home and for Rita to recognise him. What was also weird was that Dennis didn't comment on how the street had changed since he left. He didn't comment how the Rovers had changed - how the snug or select wasn't there any more. As I said, I was apprehensive about his return. But what I was looking forward to were references to the past. Dennis was another link to the Corrie of the 1960s along with Ken and Emily. While we got told about Elsie's fate and a reference to Martha Longhurst, I have no recollection of Dennis making any references to past characters. He could've talked about Jack and Annie Walker, the snug trio, Albert Tatlock or Lucille Hewitt. Considering his links with Gamma Garments, he never talked about Swindley with Emily. He never discussed Emily having finally got married after years of being a spinster.

His lack of scenes with Ken were a disappointment as well. Considering he was due to ruffle Ken's feathers, no such scenes were shown. There were two years before Ken left for Canada, so there were enough opportunities. Where were the scenes where Dennis and Ken reminisced about the past and about Elsie, Frank and Ida, David and Valerie? We never saw Dennis talk to Peter about his mum. A missed opportunity.

Why didn't Linda Cheveski re-appear? Or what about a reference to Dennis' first wife Jenny? 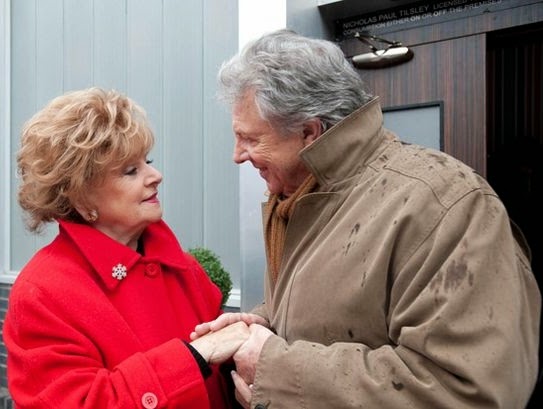 This was the biggest mistake they did. Since 2011, his scenes have mainly been with Rita. But I don't know why the producers chose to confine him to just Rita. They could have always maintained Rita and Dennis' friendship, like her friendship with Alf, while Dennis could communicate with other characters. I was pleased when the producers recognised the ironic link that Eileen lived at Elsie's house and that Elsie's maiden name was also Grimshaw. And it was nice how Julie took Dennis in recently.

I was also unhappy that they married Dennis and Rita. Rita mentioned time and again that she had always wanted to be Mrs Tanner. No reference was made before and it was odd considering Rita always said that her true love was Len. For years, she refused to remarry because she still loved Len.

There was a lot of potential for Dennis to be linked with other characters. Yes he had a friendship with Sylvia and he ran off with Gloria, but what about Audrey? They could've talked about hairdressing - Dennis was interested at one time! And  despite Gail being Elsie's lodger, no scenes were done between the characters. He became a lollipop man which gave him a story with Steve, but all was forgotten.

While Rita had always had a fun-loving and humorous nature, her marriage to Dennis made her a miserable and boring shrew. When married to Len she could be a nag which was justified, but it was a change of personality for her to be so horrible to Dennis. It was no surprise that they finally separated but it was a shame that no effort was made to portray an old aged married couple. Not many have been portrayed in soaps so it would've been a change but alas the producers didn't have time.

Ruination of a classic Corrie character 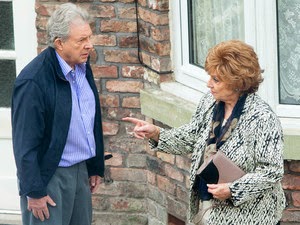 Maybe it was a mistake bringing him back. Too much time had passed. Although when they re-introduced Jed Stone, they didn't make a mess of things but he wasn't there long! Dennis could've brought some humour back to the OAP section of the show after the deaths of Blanche and Betty and would've been a brilliant double act with Sylvia.

They made him totally dependant on Rita which was an error as he was a pensioner so received a pension. When he courted Rita, she was sweet but when they married, she turned into a harridan. He became henpecked like Jack Duckworth and Stan Ogden.

If not making him henpecked was enough, they made him an adulterer as well - running off with Gloria. He returned a desperate man but by the end he even retorted to even stealing money from The Kabin.

It was a shame that he was axed - a real shame. What will Rita do now? Get a divorce and revert back to Sullivan? Who knows? Rita's not having the best luck with her old friends is she? She's fallen out with Bet Lynch, Alec Gilroy and Sharon Gaskell and now Dennis! Thank goodness she's still got Mavis!

You rarely disappoint me Corrie, but this time you have.

What about you? Were you disappointed with how Dennis was dealt with? Did you have hopes for him? Leave your comments!