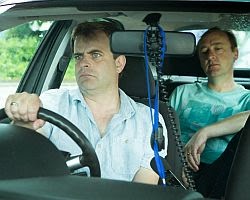 The only reason Deirdre's got to get Ken back is because of the WWI service on behalf of Uncle Albert but Tracy knows that the medals are worth a bit and poof! They disappear. No guesses where they went. She sold it for the cash to put toward the wedding. Rob was horrified. I really can't see why  he's still with her. Boy, Deirdre sure gave Tracy hell and she deserved it.

I'm with Tracy, Deirdre should have told Ken what was going on long ago and she didn't do it now, either, but guess what? Ken's coming home! Boy is he going to get a shock!

Poor Steve probably thought he had a mental in the back seat. Neil was doing Steve's head in while he was assessing what he saw as the competition. Meanwhile Andrea is desperate to get back with Lloyd and complaining because she can't go home. Well, duh. You left home of your own accord, Laydeh. No sympathy here. She wheedled her way into a night on the sofa at the pub. Michelle's not going to be happy. And naturally, Neil saw her hug Steve again. And I love it when Liz gets tough and man-handles Steve!

Now Steve is harbouring the enemy and Lloyd thinks Andrea's gone for good. Michelle is insisting Steve be the one to tell her to leave but she hasn't gone and it was only supposed to be one night. Neil finally confronted Andrea and then Steve but Lloyd stood up and presented himself as the one Andrea was in love with. Neil begged, Lloyd washed his hands.  Andrea still has her feet under Steve and Michelle's table and is feeling very sorry for herself.

Eva advised she make Lloyd listen so she barged in and locked the door. He won't have it and Neil is running around begging her and anyone else that's liable to listen. Lloyd's right, though, Steve is his best friend, it is kind of disloyal to be harbouring the enemy. Surely she has other friends. Apparently not.

Windasses are heading to bankruptcy court and all Anna can do is holler about the chicken Katy brought from home. And at Gary's prodding, Katy finally made up with Anna. Surely the furniture is Anna's, the bailiffs couldn't take that, could they? Faye let them in not knowing who they were, thinking it was the people that Owen was expecting and it's all hit the fan. Quite humiliating, out on the cobbles, in front of the neighbours. Owen is promising to fix it all. It's not going to be easy. 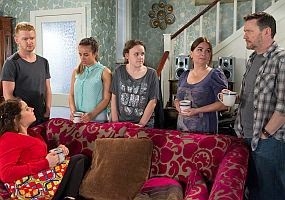 Haven't seen Anna in the pub cleaning for ages but on the day Owen might be declared bankrupt, she's asking for a pay sub and going to the food bank. The bailiffs didn't take the food. If I was Anna, I'd go to Roy for help, not Liz at the pub. The lady at the food bank was really nice. She likely deals with people that feel just like Anna all the time. It helped, too.

But it's bad news for Owen. He's bankrupt. I guess the only good thing is now his debts are all written off. Isn't that how it works? It's hard on Owen, of course. Hard on all of them but their friends are sympathetic and kind. Still, make the best of a bad situation and Anna decided to take Owen back into her bed. Now she's all smiley and it's only a day or two after the bankruptcy and they all seem optimistic and not down at all. Isn't sex wonderful? Well, unless you're a 12 year old being accused of sleeping around, according to Craig who has seen online rumours of Faye. Oh dear!

Michael is putting rocks in Gail's garden and he's going into catering. Wonder what that's going to entail. Meanwhile, it's Audrey's birthday and Michael has been invited, mainly because Gail wanted to make a point. Nick, as usual, was ruder than a rude thing and that continued all week.  Michael has taken posession of a battered old Ice Cream van to make a second job for himself. I can just picture Gail scooping out treats! 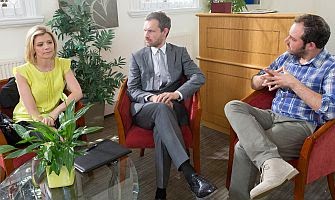 He was first mean enough to drag Yasmeen in to his little war with Leanne and he's gone over the line. Leanne is not going to lie down and take it not even for Simon's sake and gave them all a blast, in no uncertain terms. Leanne kept that business going when Nick was sick. He'd have nothing if it wasn't for her. But  he's not going to be reasonable. His solicitor advises mediation but mediation did nothing to help, nor did having his car towed and it only made Nick's bad mood worse, not to mention Leanne's. I could have told them it wouldn't work. Nick's hurt and angry and Leanne always has been a loose cannon. On top of that, Gail and Michael are getting along swimmingly which further irritates Nick and he's about to blow.

If Emily has been involved in it all these years and Yasmeen is the head librarian, surely she would have got to know Emily by now and realize there's life in the old girl yet. Emily is from Harrogate. Who knew? (or at least, she lived there as a girl) Really nice, hearing Emily reminisce. Laughed at Yasmeen missing her snack more than sex during Ramadan.

Yasmeen is all for a sit in and so is Emily. I bet she'd even be game to go up a tree again if that were required. Yasmeen certainly underestimated Emily, didn't she? Roy isn't sure that militant action is good but then that's not his style, is it? This week was the anniversary of the date Hayley found out about the cancer. Nice that Anna encouraged Roy, saying Hayley would be behind him all the way. And with the slowness of names being added to his petition, I think Roy realizes he's got to take more affirmative action. The petition didn't have any effect at all and the library is due to be shut. Yasmeen is determined to take civil action. A sit in! Roy? Really? Well some years ago he was certainly willing to protest against destroying a bat colony, why not the library? He may be hesitant now but I imagine he'll join the crusade.

And why couldn't Kal allow a community notice in the gym? Meanwhile, Yasmeen is still disapproving of Leanne and keeps pointing out all the flaws in Leanne's life. And she does it with such style. She doesn't shout or hiss. She's very polite but then WHAM another shot before you know what hits you she fires another one! Her mandate is to try to push Nick and Leanne back together or at least get Nick on her side. Nope.

The Gary/Alya drinking game continues. There's Alya, wearing a hot pink sari no less, there's Gary who just happens to be in the builder yard. Fiz complained that they're all very crowded in Number 9 with two adults and two small children. IT's a pity Number 9 doesn't have elastic walls like all the other houses on the street.If they're crowded there, what must it be like in Number 5 with five adults, counting Craig, and sometimes a little boy. 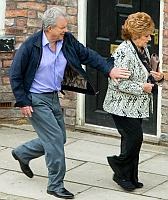 Dennis is looking very smug these days. He's making very positive inroads winning Rita back though Norris is doing his very best to undermine things. He thought he had Dennis bang to rights with the missing 20 pounds and only made himself look bad when it was found. He's only made himself look bad. It was Rita that took the money, still acting like she owns the shop. It's too bad Rita doesn't own the business any more because I think she'd end up sacking Norris after all this business.

Even then, Dennis was generous about Norris' loyalty but not in front of him. Norris wouldn't extend Dennis any of the same generosity and then Julie blurted out that it was Dennis' idea that she throw him out, hoping that Rita would take him back in, which she did. The problem here is, I think Dennis really does love Rita but Dennis being Dennis, resorts to scheming and it often backfires. Rita still has enough distrust in Dennis to have doubts once Norris brought up that little gem.