Norris and Mary - characters or caricatures?

(This post was originally posted by Ruth Owen on the Coronation Street Blog in July 2014.)

To begin with, Norris - is he a true character or just a caricature? Well, some of his reactions are what might be called and understood as 'typical' Norris, including his busy-bodying and his lust for gossip. These aspects of Norris are so predictable that at these times he is presented as a caricature.

To be a character, a person needs some depth and in his dealings with Rita, Norris is clearly a character.

His attachment to Rita has been quite a torment for him and indeed for us too. Does he love Rita? Is he in love with her? They must know each other inside out having worked alongside each other at The Kabin for decades - seeing each other at their best and at their worst - tired, angry, frustrated, bored - they will have seen the lot from each other.

Rita and Norris have their roles - Rita the one in charge, the wise one, the tolerator of Norris. Norris is the tolerated one, the nuisance, the one who sees and suspects the worse in everyone and readily tells them about it and, let's not forget, the tormentor and love object of Mary. 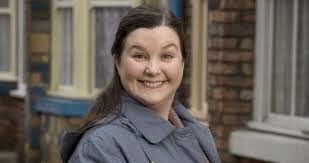 Mary's name is always accompanied by words such as weird, odd, strange and creepy. It's a shame because though she is undeniably different, even unique, she offers such huge comedy potential. Her uniqueness is genius. Whoever conjured up the character of Mary Taylor deserves an award.

So is she a character or a caricature? Certainly, as with Norris, there is a predictability about how she behaves. But she does have terrific cooking skills, an admirable work ethic and a willingness to get involved.

What really makes Mary a character rather than a caricature is how tenderly she cared for Dev's children and how sensitively and thoughtfully she handled her responsibilities to make things as easy as possible for Dev as he dealt with his own grief and tried to manage the grief of his children.

Mary's attachment to Norris is baffling to many of us though clearly not to her. That said, she is not totally blind to his faults and has been known to berate him for his idiocy or unkindness.

Yes, Mary did try to seduce Roy, during their chess sessions, but soon realised what a pointless task that was. Devoted to Hayley as we know he was, we never feared for a moment that Roy would succumb to her intentions.

Now though, in an attempt to take Roy's mind off Hayley and provide distraction and mental stimulus, she plays chess with Roy - and has no designs on him.

Whatever they are - characters or caricatures, they are both invaluable to our favourite street.