Police Fail award: They're using Peter's fingerprints on the bracelet as evidence but Deirdre told them she washed it after she found it. His fingerprints on it are irrelevant. And does nobody do polygraph tests these days? Not court-admissable but it still helps.

Musical ambiance: Hit the Road, Jack while Lloyd is gushing about Andrea moving in. Premonition, anyone?

It's Not About Me award: Tracy actually showed concern for her family and didn't make it about her. That's a first.

Pants on Fire award: Andrea lied that there was nobody else when Neil asked. 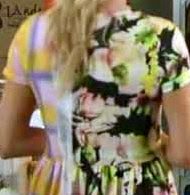 Fashion Fail: Sinead was wearing the halves of two different dresses. What's up with that?

Hypocrite award: Michelle was going to keep Andrea's affair from Steve. After she went mad when Steve was keeping Peter's affair secret.

Pants in Flames: Deirdre hasn't told Ken about any of Peter's problems.

Lines of the week:
Tracy "I've lived among murderers. I think I'd know one if I saw one"
Lloyd "Things are different this time around. I know where I stand with Andrea" (AAANNND there it is, the Phrase of Doom you've all been waiting for)
Steve "I don't want to spend the night in the pub with a load of people brainier than me" Lloyd "Mate, you do that every night!"
Michelle "Peter is a wino, not a psycho"
Rita "I don't want my honour defended, what there is left of it"
Julie "Dennis. It's a stupid plan" Dennis "Yeah, I know if it. But it just might work"
Steve "I've got a PHD in secrecy"
Andrea "I got so used to OK that I forgot what it was like to be happy"
Tracy (about nail varnish) "I can't decide between bone china and movie idol" Deidre "I reckon both, then you could call it Bone idol" (Ha!)
Deirdre about Uncle Albert "He saved the lives of two men" Tracy "Really? That means the family breaks even in my books!"
Eileen "I never trusted her" Lloyd "The phrase you're looking for is I Told You So"