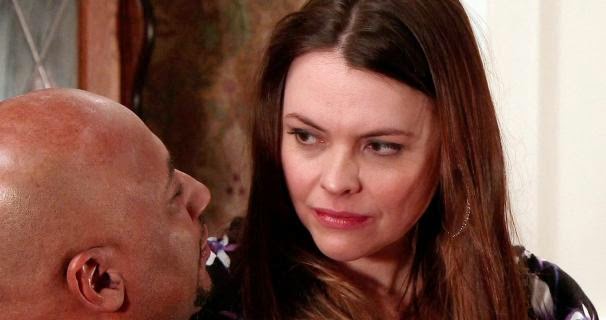 Kate Ford has been interviewed this week about the upcoming storyline on Coronation Street in which she gets Tony to ask Liz for his money back that he loaned to Steve.

When Tony has the money returned to him, Steve knows he's skint and in trouble.  However, he does have the pub to sell if he gets desperate and Tracy decides it could be time for her and Tony to buy the Rovers for themselves.

Kate says this about Tracy: “She definitely has more power, maybe because Tony’s realised just how far she’ll go and that she really does stop at nothing to get what she wants.”

So Tracy’s got Tony wrapped around her little finger!
“Definitely. The balance of power has changed. The situation at the Rovers is also a factor. Tony’s fed up with Liz constantly putting Steve first and taking advantage of him in the process. He’s tiring of Liz and he’s lusting after Tracy even more.”

Does Tracy genuinely care for Tony?
“In her own way… She thought they’d be good together before. But when he started lying to her, Tracy quickly reminded herself to look after number one. Right now, they’re both using each other to get what they want – and both enjoying the sex!”

And it’s after some passionate rumpy-pumpy that Tracy reveals her desire for the Rovers, isn’t it?
“Yes. Tracy announces they should get their own pub. Tony agrees, but he says he’ll dump Liz  in his own time. When Tracy then tells him she wants the Rovers rather than any old pub, Tony’s taken aback.”

Why’s Tracy so set on the Rovers?
“It would be the ultimate success for Tracy. To win the Rovers from the McDonalds and become its landlady would mean she could show everyone what she’s really made of. She loves showing off and she wants to be the wealthiest, most successful person in the Street, not least because she’s determined to outdo Carla [Alison King]."

And what does Tony want?
“He seems to go along with Tracy. Like I say, she has him where she wants him. She also has a plan of action. She tells Tony to lie to Liz and tell her he needs the money he lent her back as a loan shark is after him.”

Does Liz fall for this?
“Yes. She has no reason to think Tony’s lying, as he’s helped them out with money before. She knows he’s never really short of cash as he’s got fingers in loads of pies. Liz even suggests to Tony that Steve [Simon Gregson] sell his half of the Rovers so he can repay Tony from when Tony settled Steve’s tax bill. She has no suspicion whatsoever of him being up to no good, nor does she know about Tracy being behind it all.”

Is Tracy cut out to be a pub landlady, though?
“Oh, she’d be awful! The pub wouldn’t last a week. Tracy would be so rude to everyone they’d have no customers left!”

What about Liz' half (wasn't she the secret investor when Steven wanted and tried to purchase the pub)? I can just see her and Tracey facing off on opposite ends of the bar, with Tony cowering in the middle... ;)